Horror Art and Music – part I

Horror art on album/CD covers can be found mostly in the world of metal music, with a few exceptions. I am not talking about the ‘hair metal’ bands of the 1980’s. I am talking about bands that lyrically, are not pop music and don‘t write for the expressed purpose of being on the radio – bands with a dark side and a more gritty commentary on the world.

I decided to break this into three posts. This post displays the more mainstream bands and their album cover art. The next post will have extreme metal bands (death metal/ black metal/ thrash). The last will feature several works each from particular artists and the album covers they’ve created.

Black Sabbath – Black Sabbath
This album cover used to give me the creeps… (Okay, it still does). I’d say that Black Sabbath started the trend of horror art (and photography) on album covers, along with telling horror tales as subject matter for lyrics. I found the full panoramic photo that wrapped around the vinyl album cover encompassing both front and back. It is posted above. (click on pics for larger images)
–

Iron Maiden – self titled
‘Eddie‘, the half-rotted corpse, is probably the most recognized mascot in music. The day I saw the cover of the first Iron Maiden album at a record store in my hometown, with Eddie’s twisted, tendon-exposed face gazing at me from a back alley, I purchased the album immediately without even hearing it. Song titles like, Phantom of the Opera, Prowler, and Transylvania helped my decision, I’m sure. Derek Riggs had a successful career, painting dozens of Iron Maiden album covers, T-shirt designs, posters, and tour book covers for the next 30 years.

Megadeth – Peace Sells
The Megadeth mascot, Vic Rattlehead, is the personification of the phrase, ‘See no evil, Hear no evil, Speak no evil‘. The concept and look was originally conceived and sketched by guitarist/frontman Dave Mustaine himself. However, the fan favorite designs were the paintings done by artist Ed Repka, for Peace Sells… But Who’s Buying? and  Countdown to Extinction.

Judas Priest – Jugulator
From the late 1980’s until this day, Judas Priest has had a series of robotic killer giants for their album cover art. Jugulator, by artist, Mark Wilkinson is my favorite killer robot of the series, a monstrous mechanism hell-bent on destruction. I’ve included the full artwork at the end of the article, which could be found in the CD sleeve.
—

Rob Zombie – Hellbilly Deluxe
Not only for the cover, but the whole in-sleeve/ booklet of this CD is amazing. The first time I looked at the CD insert, It felt like I was reading an old issue of Famous Monsters magazine, complete with mock advertisements for creepy masks, monster posters, and some wonderful artwork by Zombie himself. Included in pics is the robot from the film, Phantom Creeps.

Dio – Holy Diver
The giant demon creature from the cover of Holy Diver became a staple in the band’s album covers, videos and live shows. Ronnie is also credited for making the devil-horns hand-symbol a widely used gesture in the world of heavy metal music. The symbol is actually an old italian hand gesture used to ward off the evil eye.
–

Heaven and Hell – The Devil You Know
When the members of Sabbath enlisted Ronnie James Dio as vocalist in 2009, they released a CD under the band name, Heaven and Hell. I thought the cover art was amazing. Then I found the full painting by Per Haagensen entitled Satan, which really blew me away. Full Artwork at the end of this article.
–

Ozzy – The Ultimate Sin
After leaving Sabbath, the Ozz-man continued the tradition of using dark imagery in CD covers, even though his lyrical content had moved away from the horror imagery. I would consider this his best cover art, painted by the impeccable Boris Vallejo.

Emerson Lake & Palmer – Brain Salad Surgery
Even before Alien, it was this ELP album cover that introduced me to the work of H.R. Giger. His distinctive style and nightmare visions would go on to grace the album covers of many bands.  Of course he was also famous for the design of Riddley Scott’s Alien.
–
–

The Misfits – American Psycho
The hooded skull creature called ’the fiend’ that became synonymous with The Misfits CD covers, T-shirts, and merchandise is based upon the movie, The Crimson Ghost. This could be the second most recognizable mascot in rock music. I also included the cover art for Die, Die, My Darling, one of my faves.

Steppenwolf – Monster
Going way back here to 1969, I’ve included the back cover art to Steppenwolf’s politically charged concept album, Monster. The art spills over onto the front cover. You can really spend some time looking at each section in detail. Click on the pics to see a larger image. I have searched for the artist’s name but have come up empty handed. If anyone knows who did the work, please let me know so I can include it here. 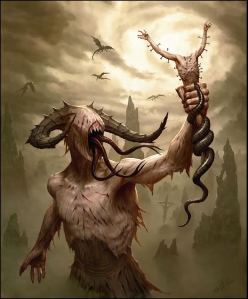 Looking for more suggestions on great horror art from CD covers (I’m not including movie soundtracks). Let me know your suggestions to include here or for my next article(s).