Despite the fact that the creature doesn’t seem to be on the same level with special-fx for its time, this film is still a classic because of a good script and some good acting. ‘It’ is a one-eyed bulbous creature with many cottony flaps hanging from it like a jellyfish. It floats across the ground at its victims. Many times it floats toward the camera because this film was Universal’s first 3D movie. A spacecraft crashes in the Arizona desert. A young couple, Carlson and Ellen, see the crash from their cabin in an impressive scene. Convinced it is a meteorite, Carlson heads to the impact site and witnesses a craft of some kind before it is buried in the earth by a cave-in. Soon, several of the townspeople disappear. When they come back they are mindless automatons collecting various metal and electronic devices for unknown reasons. Sherriff Warren becomes suspicious and forms a posse to hunt down the intruders. Carlson descends into an abandoned mine where he makes contact with the beings. They communicate to him that they have crash landed by accident and will leave as soon as they collect enough items to rebuild the damaged ship. However, the posse has killed two aliens and it is not known how the creatures will retaliate. The film was based on a short story by Ray Bradbury called ‘The Meteor.’ It was directed by Jack Arnold (Creature From the Black Lagoon) and stars, Richard Carlson (Creature from the…) and Barbara Rush (When Worlds Collide). There are a couple of scenes where you can see the wires, especially in HD, but it still holds up as a good 50’s sci-fi/horror classic.

This is a joint venture between Sam Katzman and Charles Schneer. It features the stop motion effects of the late, great Ray Harryhausen. Hydrogen bomb testing in the Pacific Ocean drives the Giant Octopus out of its natural habitat. As radioactivity drives away its food supplies the beast finds nutrition from other sources. Getting the taste for humans early in the film when it attacks a shipping vessel, it then heads to the populous areas on the US west coast. It attacks San Francisco in a dramatic scene on The Golden Gate Bridge. There is the classic 1950’s love triangle mingled into this film between Navy Officer, Pete Mathews, Professor Carter and marine biologist, Leslie Joyce but it is somewhat underdeveloped. In the end the two men have to work together to detonate a hand delivered torpedo deep within the brain of the Giant Octopus in a tense underwater scenario. Stars Kenneth Tobey (The Thing from Another World), Donald Curtis (Earth vs. The Flying Saucers) and Faith Doumergue (This Island Earth). The dvd features wonderful special features which include Harryhausen talking about budget restraints making it only possible for him to animate six tentacles on the beast, instead of eight. He also talks about the San Francisco mayor’s reluctance to have the Golden Gate Bridge seen in the film being destroyed. This forced the film to scrap several shots that were to be taken on the bridge itself.

I love that this film starts with a narrator telling us it is the future, 1973, and man has landed on Mars. A spaceship is sent to rescue a previous mission that has gone bad. They find one survivor, Col. Carruthers, and inform him that he is suspected of murdering the rest of his crew. He insists that it wasn’t him; that it was some alien life form, but the crew argue that no life has been found on the planet. He is confined to his cabin for the four month journey home but the crew soon realize they have made a mistake. The humanoid creature enters the ship before take off.  Now it hunts and kills the crew members one at a time as it makes its way though each locked level of the ship. It seems indestructible until a dangerous and sketchy plan to destroy it is devised. There are only a few crewmembers left and at their last level, with no where else to run. The similarities to the plot of Riddley Scott’s Alien are notable. The scaly reptilian creature design was very good. There are some fantastic set designs and the director’s use of shadow and light creates much of the tension and suspense. You are rooting for the crew members to defeat this ugly creature but ‘It’ keeps coming like an unstoppable terror. Directed by Edward L. Cahn, who also did She-Creature, which wasn’t quite as good. 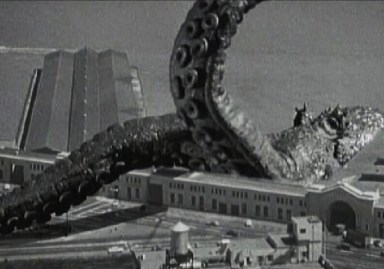 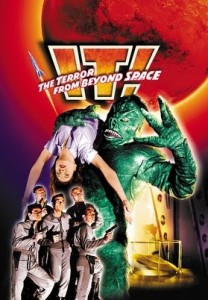 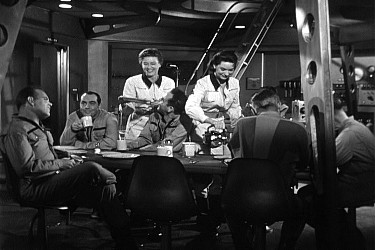 10 thoughts on “Creature Features revisited – the ’It’ Movies”