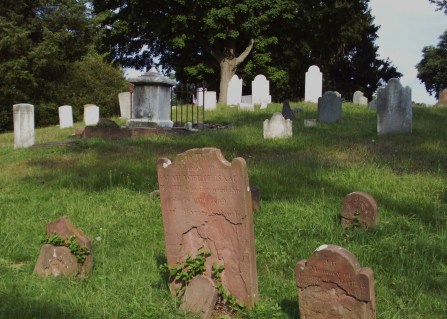 Near the end of the Revolutionary War, the British erected Fort Golgotha (loosely translated; Place of Skulls). They removed 100 tombstones from the top of the hill in the burial ground to build the fort; they did not remove the bodies from the graves. From that vantage point the Brits, under command of officer, Benjamin Thompson, could keep a close watch on Huntington Harbor. Not letting any materials go to waste, the tombstones were used to build stone ovens for baking bread. The bread baked in these ovens were therefore imprinted with names, dates, and epitaphs from the engraved stone and were thusly called, Tombstone Bread.

When the British retreated, the fort was torn down in 1784, but it’s foundation blocks are still in the ground.

On a side note; about a half mile up the road, General George Washington delivered a speech to townspeople and local militiamen to rally them against the British. The site is marked with a patriotically painted building. During Washington’s Long Island visit, he was an overnight guest at Sagtikos Manor where an assassination attempt was thwarted by the host family. He also dined at Hart’s Tavern a short walk from the manor. Hart’s Tavern is no longer standing.

Impressions:
The Old Burying Ground – My resident psychic tells me there is a spirit on the grounds by the name of Andrew or Mathew, or perhaps some combination of the two. We could not find a tombstone to verify this. The presence watches over the cemetery to protect it from British soldiers.
. 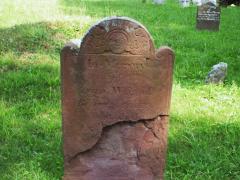 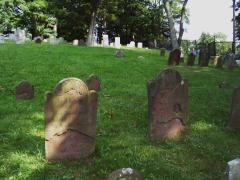 Gravestones in the 1700’s were made from slate (brown stones), which holds its engraving very well, even though many are broken.
. 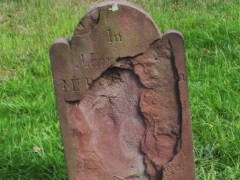 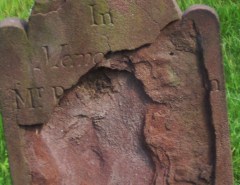 The broken façade of the tombstone seems to reveal a face.
. 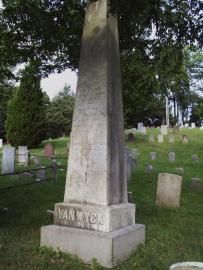 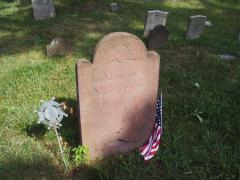 Suffolk County in the 1700’s was considered part of New England (not New York).

3 thoughts on “The Old Burying Ground and Tombstone Bread”