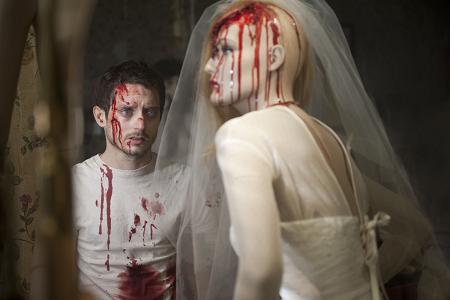 What a novel idea. You can shoot a film first person POV film without the pretense of carrying around a camera. That way when the character is running through an alleyway or climbing a fence, you’re not asking, why is this guy still filming? Although this is a remake, I am not offended by what the filmmakers have done here, as I am sometimes with

other remakes. Perhaps that is because Maniac (1980), although good, was never anyone’s favorite film. The different approach on the film is welcome.

This is quite a good film with the feel and mood of a 70’s /early 80’s slasher. However, it also has the sensibilities and character depth of a modern film. It’s not a rehash of what has come before but a new and original look at the slasher genre. The cinematography is excellent. There are some great views of NYC giving the viewer a real sample of its various textures,

its pulse and its delicate lifeblood. Elijah Wood plays a first-rate part as Frank Zito, the scalp stealing, mannequin collecting psychotic. He flips from tragic figure to frightening psychotic a dozen times throughout the film. The French photographer, Anna, who takes an interest in Frank’s work is a fine actress (Nora Arnezeder). When Anna realizes that Frank has killed her mentor/friend it is an unnerving scene. There are trippy flashes that show some of the reason for Frank’s psychosis but it’s not overdone. It gives you just the right amount of glimpses to suggest the painful evolution from his torn childhood to twisted adulthood.

The film is raw and gritty, both bloody and dirty with a strong R-rating – the way a horror film should be. It combines the best of slasher films with the internal struggle of characters in psychological thrillers like Silence of the Lambs or The Red Dragon. It gives me renewed faith in American horror films… oh wait, this is a foreign made film. Recommended viewing.

Recommended if you like: Slasher films, Silence of the Lambs, The Red Dragon, Torso, The Toolbox Murders