My ‘Top 10’ are the films that are the least hokey and have a more serious tone…that is, as serious as you can get with plot elements like: mental telepathy with a giant monster, aliens destroying the world with a three-headed space dragon, and two mini-fairy princesses singing to a giant butterfly. So while I love some of the 1970 Godzilla films (Godzilla vs. Megalon and Godzilla vs. the Smog Monster, in particular), I can’t wholly recommend them to someone not fully indoctrinated to the world of Toho Kaiju; there are too many cringe-worthy scenes. If you didn’t grow up watching those 1970’s films, you probably wouldn’t appreciate them today. The films listed here are ones I can recommend, however, aside from the original film, you will have to be open to fantasy elements and a generous amount of suspension-of-disbelief.

Aside from the original which will always be 1st in my book – the rest are in no particular order, aside from chronological dates. I had to break this into 2 posts.

This is obviously the most serious and grim film in the franchise, so much so, it seems like a different category altogether. It contains the science-fiction without the fantasy elements of its successors. Its allegory message about the destruction and devastation caused by the atomic bomb is both sad and frightening. It’s one of those films that you can watch today and still be affected by it. Most of us grew up with the American version starring Raymond Bur as the reporter relaying all the detail of the giant monster attacks. All of this footage was shot afterwards and while it was spliced in rather seamlessly, once you see the original Japanese version, the splicing becomes obvious. The original version (Gojira) focuses more on the love triangle of three characters (Emiko, Dr. Serizawa, and Hideto Ogata) and the new oxygen destroying weapon created by Dr. Serizawa. He decides this weapon should never have been created and takes his knowledge to his watery grave. In doing so, he also gives up his love of Emiko to his rival suitor, Hideto. The Godzilla roar sound effect was created by composer, Akira Ifukube. After many attempts at recording animal sounds by the effects team, Ifukube rubbed a string from a Contrabass with gloves soaked in pine tar.

Kong is found on a Pacific Island with Asian natives. There he fights a giant octopus and is taken to Japan for the usual financial gain of his captors. Godzilla escapes from an iceberg for his first appearance in a color film. The two meet up in Japan, smash some buildings then duke it out in a more rural area while being bombarded by rockets and bombs from the Japanese military. Toho actually experimented with shooting the entire film in stop-animation but decided it would be too costly. However there is a scene in the final edit that uses the animation footage during a battle on a hillside. There had been a rumor circulating for years that the Japanese version of this film had Godzilla win the battle in the end. But Ishiro Honda stated clearly in a later documentary that Godzilla was perceived as the ‘bad guy’ and felt Kong had to win. Both he and effects master, Eiji Tsuburaya entered filmmaking because of seeing King Kong (1933) and being awed by it. They wanted to let Kong win out of respect. This film is more hokey and silly than other films I reviewed here, but it is the only movie that will pit these two iconic monsters against each other. For that reason it had to be on my list. Interestingly, Toho wanted to film another King Kong vs. Godzilla in the 1990’s but had difficulty securing the rights to Kong.

This film is the first appearance of Ghidorah and the first time Godzilla, Rodan, and Mothra shared the screen in the same film. Rodan had its own film previously (1956). Mothra had its own film, Mothra (1961) and earlier the same year appeared in Mothra vs. Godzilla (aka: Godzilla vs. The Thing – 1964). Princess Selina, in Japan for protection against assassins, sees a UFO during her flight to Tokyo and hears a voice that tells her, “Leave this plane, now.” She opens the emergency exit and jumps (at 30,000 feet). Seconds later the plane explodes. Meanwhile, a meteor crashes into a mountainside and hatches in flames revealing, Ghidorah. The princess returns in a trance, claims she is from another planet, and warns the people of Earth that Ghidorah will destroy Earth as it did her planet. Meanwhile the fairy twins call to Mothra to battle Ghidorah. Godzilla and Rodan are in their own battle with each other in some classic Kaiju brawling. Mothra attempts to convince Godzilla and Rodan to join the fight against Ghidorah. Eventually they do and send the three-headed, two-tailed monster packing. The English version changed the spelling to Ghidrah. There are a few minutes cut from the English version and it makes for some continuity errors in the edit. However, this is still a fan favorite from the early years of Kaiju films.

This was like the Superbowl of giant monster films. All giant Kaiju previously introduced in other Toho films share the screen in this mega-battle for earth. 1969 ain’t no ‘summer of love’ in Japan, its all out worldwide destruction. This was originally conceived as the final Godzilla franchise film. This was definitely the end of an era with the original Godzilla team splitting up after this film. Eiji Tsuburaya would go on to the Ultraman television series and Ishiro Honda would stop directing Godzilla films after the next film, Godzilla’s Revenge. He did return however several films later to direct The Terror of Mechagodzilla. This would also be the last film with Akira Ifukube composing music for some time. In this film, the giant monsters appear all over the world attacking famous landmarks in France, Russia, London, Beijing and New York (where Godzilla blows up the UN Building). They are being controlled, via metal implant device, by an alien race looking to take over Earth. Scientists discover the aliens are broadcasting control over the monsters from the moon and a battle ensues to knock out their communications. With no choice left, the aliens release Ghidorah to attack earth. However, the monsters join together to defeat Ghidorah for a final battle. (note: In the US trailer they mislabel one Kaiju as Baragon when it is in fact Gorosaurus)

The first 20 minutes of this film is a recap of Godzilla history, reusing footage from previous movies. And it’s not wholly accurate. Later in the film there’s also a recap of the previous film, Godzilla vs. Mechagodzilla. Most of the 1970’s films were shot with a much lower budget than the previous era, made evident by stock footage, reused clips and battles taking place in the less detailed country areas (what amounts to a few dirt hills). Also gone is the massive Ocean Pool set where Godzilla would make his dramatic entrances. The film introduces a new Kaiju, Titanosaurus, who is not as convincingly made as most previously constructed monsters. Its long neck is rubbery and reveals some of the shortcomings of suitmation. By this time, special effects leader, Eiji Tsuburaya, was producing Japan’s Television show, Ultraman, and special effects were taken over by his underling, Teruyoshi Nakano. However, even with all the budgetary constraints aside, there are some excellent Mechagodzilla attacks Japan scenes and a big countryside Kaiju rumble in the film. Godzilla is cut by Mecha-G’s laser-beams and spurts blood out of the side of his neck–a first for any Godzilla flick. An original Japanese version was never released but was edited because of too much blood and brief female nudity (non-sexual in nature). This would be the last Godzilla film directed by Ishiro Honda. ** I could easily swap this out with Godzilla vs. The Sea Monster (see honorable mentions) which was a better written and plotted film, but was slow moving in some aspects. 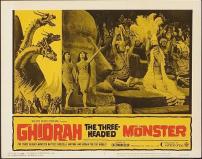 how did I miss this scene?