We all probably know what the story entails in The Fog, but to review it briefly, The town of Antonio Bay is cursed due to the founding father’s destruction of Captain Blake’s ship, the death of his people, and stealing his gold which is invested in the town.  On the 100th year anniversary, the spirits of Blake and his crew come back for revenge and to take back what is rightfully theirs, the crew’s gold which was melted and fashioned into a giant gold cross. 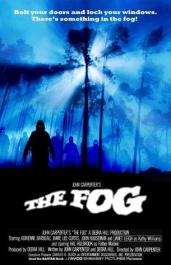 deaths at the hands of the dead spirits. The mood and atmosphere are top notch in this film. Carpenter took a queue from the EC Horror Comics of the 50’s and fashioned it into a classic ghost tale of American Gothic Horror.

One of the creepiest scenes to me is the attack on the fishing boat, when the fishermen come up from below and see stoic figures standing in the fog on the bow of the ship.

The mystery of what these shadowy figures look like, the lack of details, makes it scarier then fully shown ghost images. Quite often the only thing in clear view are the hooks that these ghouls are holding in their shriveled hands. The whole sequence with Mrs. Kobritz, the babysitter at the house was tense, a prime example of Carpenter’s mastery of suspense.

Carpenter once again crafts a wonderful score for the film including the creepy main theme. You can hear it below in the video. I had purchased the film soundtrack and play it often during our Halloween activities.

What most people don’t realize about the film are the multitude of references and homage’s to other horror icons in it. I point out a few in the Fun Facts. 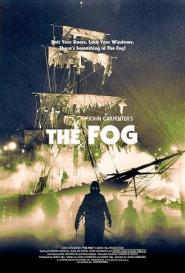 Tom Atkins’ character mentions Bodega Bay, which was the setting of The Birds (1963).

On the radio, a search for the lost fishing boat is mentioned – the radio voice names, Waitely Point and Arkham Reef as points being searched. Both are frequently used titles, (one a name, the other a place) in stories by H.P. Lovecraft.

Carpenter and Hill were inspired to write this after a trip to Stonehenge and seeing the ancient ruin shadowed in thick fog. Another strong influence on the story was The Trollenberg Terror (1958).

When water from the ships nameplate spills on the cassette deck at the radio station, the tape says, “like an albatross around the neck,” a quote from The Rime of the Ancient Mariner.

The coroner in the film is named Dr. Phibes, an obvious nod to the Vincent Price films, The Abominable Dr. Phibes and Dr. Phibes Returns.

The part of Father Malone was originally offered to Christopher Lee, but he was unable to clear his schedule for the shoot.

This film brought mother and daughter horror stars together in a film, Janet Leigh (Psycho) and Jamie Lee Curtis (Halloween). Both owe much of their success to the popularity of the horror films they had stared in.

Carpenter’s Main Theme for The Fog: 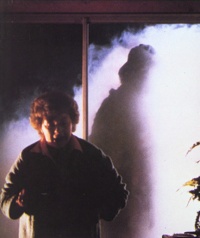 Thought I heard something

It was a cold, dark night…

Adrienne showing off her assets (not from this film) 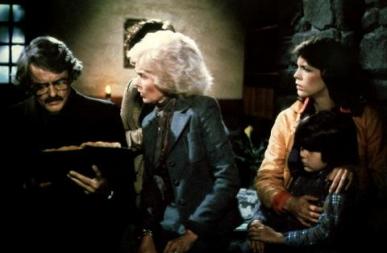 what you been smokin’ ?

that’s sad. lets go to my house and hook up!

This ‘Making of The Fog’ video is about a half hour long: