The title of this film wasn’t a real eye catcher for me and I actually prefer the Spanish title, The Witches of Zugarramurdi. With that said, I delved into the film not expecting much and was delighted with what I saw.

This is a wacky, crazy, over-the-top horror film that is a lot of fun. It’s a Spanish film, subtitled, but easy to watch and enjoyable

viewing. A rag-tag band of thieves heist a pawn shop and attempt to make a clean getaway. The problem is with Jose; it was his day to watch his son, per his divorce settlement and he brings the young lad along on the heist. With Antonio, he had to borrow the car from his girlfriend but she needed it back and took it during the robbery leaving them without a getaway car. And that’s just the beginning of dozens problems that plague these enterprising men as they head for the French border with a bag full of loot and gold.

Unbeknownst to the band of thieves, the Basque town of Zugarramurdi, in the Spanish countryside, is cursed and populated with members of Europe’s oldest and biggest witches coven. Oh, and they happen to be cannibals. The sack of pawned gold holds evil power because of the broken promises and lost hopes of wedding rings returned and misery dispensed. The gold will help the coven perform a sacred ceremony that will enable them to wield a reign of terror upon the world.

Comical and bizarre witch family members scuffle with the thieves and two detectives who had been on their trail. The witches raise the mother goddess, (a sight to be seen – comically horrifying on many levels) in order to fulfill a prophecy and enable the Coven to take control of the world. It’s a zany horror-comedy reflecting shades of John Dies at the End, Black Sheep, and Dead Alive. It’s a fun film that I enjoyed quite a bit and it had me laughing out loud several times. It has won numerous awards at the 28th Goya Awards honoring Spanish film and entertainment. So if you’re in the mood for some supernatural comedy horror and don’t mind reading some subtitles, look no further. This film is worth the effort.

A fun and funny film about witches, and dealing with ex-wives in this high octane comedy!

I give it 4.0 wicked witch spells out of 5 on the accursed coven of conjured concubines scale. 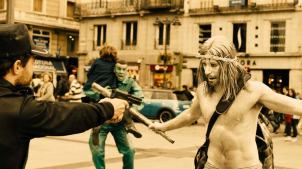 dilemma for a Christian cop

I dought I daw a puddy tat!

her name is Carolina Bang!

go see if the coast is clear…

dunce cap – they used to do this in school