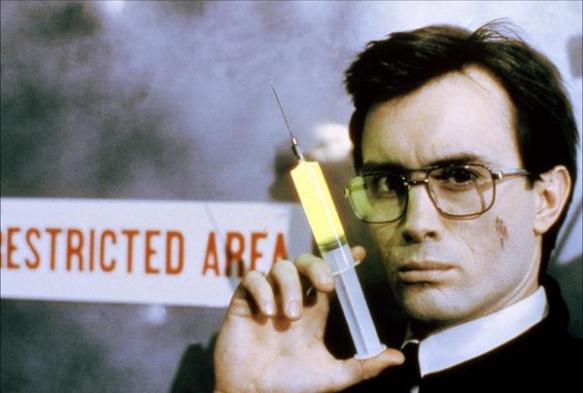 In the first 60 seconds of this film an old man’s bulging eyes explode splashing blood into a woman’s face. A few minutes later there’s a sex scene with Megan, (Babara Crompton) and Dan (Bruce Abbott). This is just the tip of the iceberg that makes up the insane world of Re-Animator. The circumstances, blood and guts, and over-the-top effects are reticent of the 1980s itself. The teaming of Brian Yuzna and Stuart Gordon on this film (and From Beyond) produce something so horribly vile and disgusting to the point you have to laugh; it is nothing less than Black Comedy. 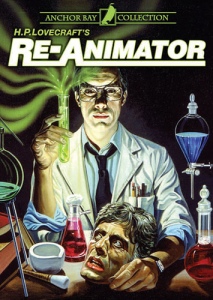 The story is a far cry from the original Re-Animator tale penned by Lovecraft to where only the names, places and basic premise remain. Doctor Herbert West has a serum that when it’s injected into the brain stem, can bring people and animals back to life. He demonstrates on mutilated cat. First Megan’s father dies and they bring him back to life. He’s not the same. Then West uses the serum on University professor Dr. Hill. At first, Dr. Hill doesn’t believe the serum will work, but when Hill tries to take credit for the serum, West kills him. Once back to life and feeling indestructible, Hill decides to fulfill his fantasy with Dan’s fiance, Megan, and kidnaps her.

What hard-core gore scenes shall I talk about? I guess the most vile are the creepy old man (Hill) makes advances on the young college student scenes. Horrifying! Hill’s head, separated from his body puts some gnarly sex moves on a naked and restrained Megan.

Despite being in previous horror films, it was Comb’s role in Re-Animator that gained him notoriety as a campy horror actor and fan favorite. The music by Richard Band provided excellent accompaniment to the craziness of the film, especially in the tense pacing of the main theme which was heavily influenced by the main theme in Psycho. John Naulin handled the Special FX using 24 gallons of blood, 10 times more than he’d ever used on a film previously. Re-Animator has since become a cult favorite and spawned several sequels including Bride of Re-Animator.

And check out the other classic Gordon/Yuzna vile collaboration, From Beyond

I give it 4.1 headless corpses out of 5 on the Frankenstein scale of b-horror re-animated flesh flicks.

Gallery of gore and nudity: 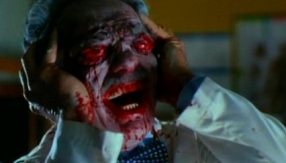 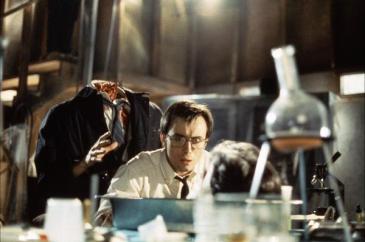 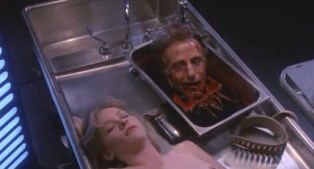 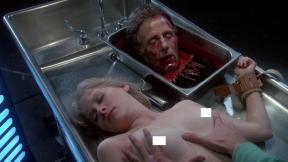