Stephen King finds cars to be very scary. It’s almost like he had been run over by a car himself…oh wait, I forgot about that. Well, he wrote stories about scary cars before he got run over, it’s almost like he had a precognitive awareness of his own future danger…now that’s scary! Anyways, in Mile 81, he finds a way to make you feel his fear of the automobile. I do think this is one of his scariest cars to date. Alone at a closed highway truck stop the car in question sits, waiting for victims.

In Batman and Robin Have an Altercation, we meet Sanders and his pop, who he picks up at ‘the home’ on Sunday to go out for lunch. His pop has Alzheimer’s and his memories are scrambled at best. It’s a wonderful tale because a chance memory of father and son surfaces of a Halloween when they had dressed as the dynamic duo for trick or treat. This surfaced memory reminds pops that he loves his son and saves a bad incident from concluding in the worst possible way.

The Dune has an elderly gentleman contemplating his own old age and mortality. He’s a retired Judge that lives on the gulf coast Florida where he’d been living since he was a boy. Within kayak distance of his home is a small sandy island that nobody knows about, or cares about, that seems to hold special powers.

From a very young age, George has seen an evil red-haired, freckled-faced boy cause violent accidents involving people he loves. Speaking to his lawyer from death row, he tells the tale that led him to killing a child in Bad Little Kid. Is he crazy or is there something more to his tall tale?

Blockade Billy is a great story about old time baseball with a wonderful character voice by a one time manager of the NJ Titans. It brought the real excitement of the sport to light while twisting it into a King style deranged knot.

Each story has an introduction about its origin which I find as entertaining as the stories themselves. Having grown up and grown older reading King, it is fitting that his stories now reflect the problems, concerns and dealings of older persons. In this book it’s about wills, sickness, the aged body, and taking care of your elderly parents…and the fear of scary young people. There’s a few stories for the younger gens here too, a particularly good one about a trash culture news site whose obit columns lead to a difficult decisions, an entertaining tale for all.

The short story is an art form like know other. You have to sink your teeth into the reader, engage them with an interesting character, turn a situation on its ear and leave them a satisfying conclusion, all within a short span of time. Sometimes you have to do these things simultaneously. King is a master at this craft and Bazaar is another testament to his prowess. 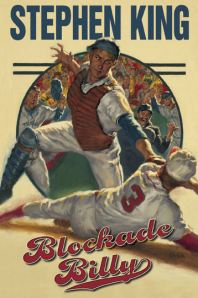