A couple of stills from this movie on Facebook caught my interest. I looked it up on Amazon and the DVD was cheap enough to take a chance. The film contains typical B-movie acting and a typical B-movie story-line, However, the stop motion animation had a 1950’s sci-fi monster film charm to it. So, I pretended the film was from the 1950s (despite being in color) and I got along fine with it. The animated creatures were numerous; some kind of horned dinosaur, a giant Venus fly trap, a few different types of giant bugs, A mutant scorpion, and a poofy giant tic looking creature. Oh yes, we also have a giant, three eyed, mutant, humanoid known as the Triclops. The effects were quite decent and smoothly filmed for a movie with a micro budget.

Samantha is on a search mission for her husband, an air force pilot whose plane went down in a giant meteor crater which is an off limit area like Area 51. She and her brother-in-law seek out a drunken unemployed pilot with a reputation for accepting questionable jobs. They set off, flying under radar into the ancient crater. When they land, they discover strange beasts and mutant giant insects. Samantha is kidnapped by the Triclops and the rest of the team sets out to find her. After some cat and mouse antics they eventually outsmart the 3-eyed giant and find Sam’s husband. They use a map with an alternative escape route from the crater to escape the exploding meteor within it.

Brett Piper, (director/producer/special fx/writer) has been doing effects for z-budget films since the 1980s. He had spent some years as FX man and editor at EI/Seductive Cinema adding minimal storylines and FX to cheap soft-core sex flicks (a real waste of his talent IMO). However, this is Brett’s, 4th or 5th recent film with a definitive direction in mind, to keep the B-movie and Creature Feature style films of the 1950’s alive by producing new films in that subgenre. He has an affinity and talent for stop-motion which puts him in a good position to do just that and in recent years his mantra seems to be giving him new recognition and a cult following.  It kind of reminds me of how Full Moon grew to popularity in the late 80s. The film’s are mostly campy fair with nostalgic effects so if that is something you would like, look up some of his films. Triclops would be a good place to start. The next film from Piper I’ll watch is going to be Queen Crab. 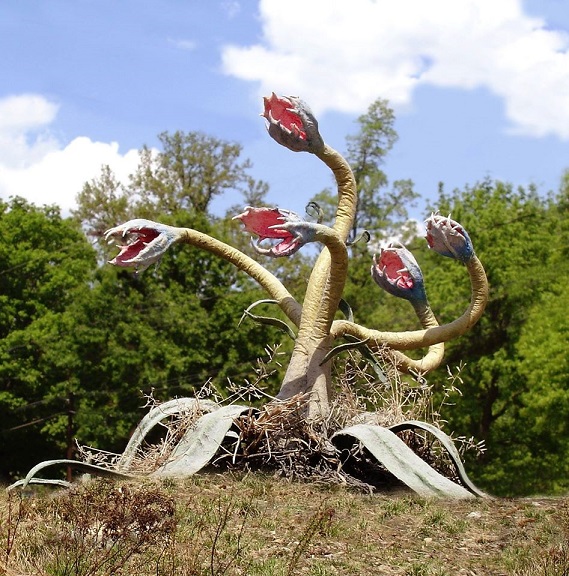 Nostalgic stop-motion is the main point of this b-movie monster-fest.

I give it 3.4 mutant monsters from far off stars out of 5 on the creature feature fun scale. 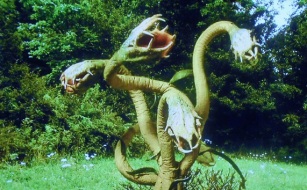 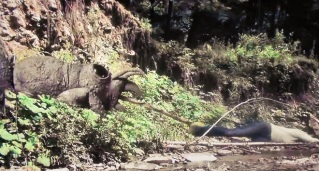 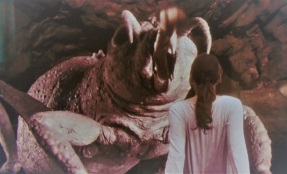 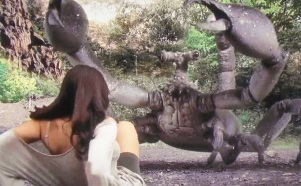 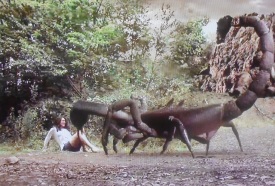 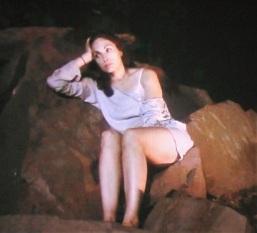 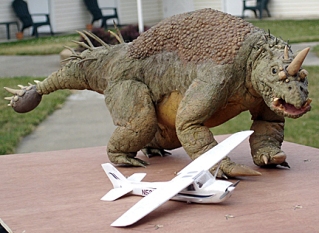 (note: some of these pics are screenshots and the quality is not as good as you would see in the actual film) 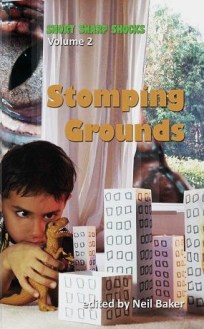 April Moon Books has released an Stomping Grounds, an anthology of Giant Monster stories which includes my tale, The Devil’s Avatar.

They’ve also made available these “excerpt cards’ to get a taste for the anthology of Giant Monster horror in STOMPING GROUNDS. (click on each excerpt card for a clearer read)

I have mine posted here along with a few other excerpts. I must say, not to take anything away from all the other anthologies I’ve been in, this is one that I am most excited about reading! Of course you all must know how much a fan I am of Giant Monsters and Dinosaurs, so I am super excited to have a story in this book featuring tales of, among other things: A Giant Wasp, Giant Lovecraftian horrors, a Giant Giraffe, a Giant FROG, a giant CLOWN…

My story The Devil’s Avatar has numerous nods to scenes in Giant Monster Movies including, Attack of the 50 ft. Woman, Talos from Jason and the Argonauts, King Kong, and others. Hopefully, if you read the story, you’ll get to certain parts and say, Hey, this reminds me of the scene in the movie, so-and-so (fill in movie tittle). 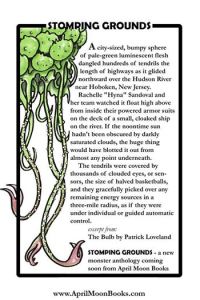 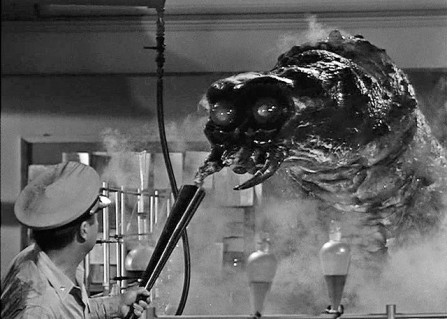 For those who love to indulge in the old 1950’s sci-fi horror scene here are some gems of the time. With so many movies being made in that era, it is easy to end up watching a complete dud or incoherent Z-grade film. So, I’ve picked out some films that are a cut above the rest. Naturally, you would need to have some love for the films of the era, some nostalgic enjoyment, and not compare them to today’s super fast-paced entertainment.

The Fiend Without a Face (1958)
I had been looking for this film for a long time, only – I didn’t know the name of it. I assumed it was The Atomic Brain or Donavan’s Brain, but I was wrong. Then I see a pic from the film on a website and bingo! With a little description you’re going to say, Oh, Yeah! I know that flick! The creatures in this film are nothing more than a brain with the spinal cord still attached. The creatures move by using their spinal cords like an inch-worm. They spring through the air using their spinal cords to attack and inject a needle into the back of your neck, at the brain stem, where they can suck out your brains. In the end, a group of folks are trapped in a house surrounded by these creatures and shoot at them when attacked. Kinda’ reminds me of the bizarro, Night of the Living Dead. In NOTLD its bodies without any brains – In this its brains without any bodies. In both they are trapped in a rural area house fighting to keep the creatures outside from getting in. One potent element in this film is the ‘squish & deflating’ sound made every time one of these things is killed.

The Trollenberg Terror – aka The Crawling Eye (1958)
There is something alive in the mist, horrible creatures from another world with giant tentacles… This is not a description from the recent film, The Mist. It is from the ‘50’s British, sci-fi/horror gem, The Trollenberg Terror. Alan Brooks (Forrest Tucker), on his way to Trollenberg, Germany and the highest peak of the German Alps, meets two sisters, Sarah and Anne Pilgrim (Jennifer Jayne & Janet Munro). Anne has clairvoyant powers and is soon receiving thoughts from some entity atop the Trollenberg peak, which is  always  shrouded by cloud and mist. She sees the deaths of several mountain climbers and they are found, headless among the rocks. Deaths continue as Alan meets with a fellow scientist at the observatory keeping watch over Trollenberg. The perceived threat of Anne’s insights brings the creatures down from the peaks and they trap both tourists and scientists in the observatory. This film has a solid story, great acting, and the creatures are magnificent by ‘50’s standards (tentacles are always the hardest thing to animate). Definitely one of the better sci-fi films from the ‘50’s. Originally had an ‘X’ rating because of the gruesome decapitation scenes – although, they are mild by today’s standards.

The Monster that Challenged the World (1957)
This film never gets much respect, probably because it is often paired up as a double-feature DVD with a less than respected partner. So, I’m here to give this film some deserved praise. OK, the monster does not challenge the world, it challenges a small town and naval base at Salton Sea, CA. Located on the San Andreas Fault, an earthquake releases some horrid creatures from a fissure in the sea floor. These giant snail creatures have a taste for human snacks. Decent (robotic) creature effects drive this film. Stated as snails, they don’t look exactly like snails, they have mandible pincers, a gaping circular mouth, and their eyes are not on stems but are receded into the head. They are menacing looking, especially when one traps a little girl and her mother in a room at the naval base. Decent script and well acted, this film should be a ‘thumbs up’ for all 1950’s sci-fi aficionados.