I’m not sure how this animated film faired coming out at the turn of the new century (1999). It was, after all, the animation of the preceding 100 years, not the new 3D CG molded perfection that was taking over modern animation. It was a cartoon. Despite its sharp lines, full rich colors, and expressive shadow-play it was yesterday’s technology. Although the giant itself was rendered with CGI it still has the 2d feel of standard cartoon animation, but it’s a beautiful film to watch.

If you haven’t watched this gem, I’m here to tell you that you are missing a wonderful tale, a visual treat and an entertaining film. It’s based on a 1968 story by British poet, Ted Hughes, called “Iron 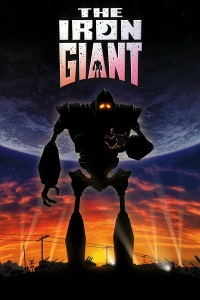 Man” and tells the story of a young boy coming into his own while making new friends and learning he can make a difference in the world. It’s set in 1958 Maine, in a small town called, Rockwell. Hogarth, a boy being raised by a single hard-working mom, befriends a robot when a satellite crash lands in the woods rear of his home. While teaching the robot the ways of the world he also hides and defends him from government men on the hunt to destroy the mechanical beast. In the end will the true nature of the mechanical monster be unleashed upon the unsuspecting small town?

The retro sci-fi robot design is the epitome of what a giant robot should look like in the subconscious mind of man, a powerful technological being crafted from the 1950s sci-fi Hollywood image bank, and earlier pulp magazine era, representative of a time of wonder, awe and inspiration at science and technology itself…and its eyes glow in the dark. Some fantastic action sequences highlight the later part of the film as the Army closes in on the Iron Giant and a final battle threatens the existence of everyone in the town.

The Iron Giant is a sci-fi must-see that sparks on all cylinders creating family entertainment enjoyable for all age groups and genders. It takes the qualities of a Disney princess tale and gives it boy-ish charm, effectively portraying a young hero a young man won’t want to cringe away from, but embrace as one of their own. The film is now regarded as an animated sci-fi classic after years of a growing cult following.

The Sputnik crossing the sky in the night 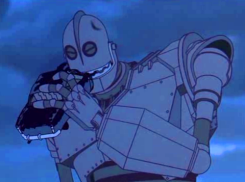 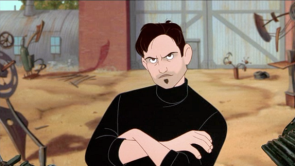 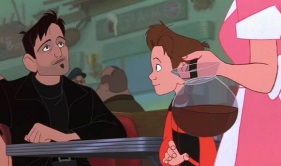 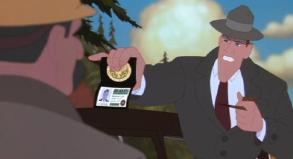