This was the first western/dinosaur film mash-up, made many years before The Valley of Gwangi. Both films were based off of a story Idea from Willis O’Brien. It is said that O’Brien penned some of the script under a pseudonym, El Toro Estrella. Although it beat the Harryhausen/Gwangi film to the punch it is not nearly as good. O’Brien was originally going to do the effects for the film but did not for

unknown reasons. It was directed by Edward Nassour and Ismael Rodriguez and the stop motion effects (and replacement animation) were most likely handled by, Nassour and Henry Lyon, though a clear credit is impossible to find. It stars Guy Madison and Patricia Medina.

An American rancher, Jimmy Ryan, comes to Mexico to find cheap land to raise cattle. He does, right next to a legendary cursed place called Hollow Mountain. The Mountain has never been explored. Soon Cattle go missing and it is said that a giant beast takes them in the night. Jimmy Ryan becomes friend’s with a boy and his father (Panchito and Poncho) and gets into a love triangle with a local gal, Sarita. Soon Jimmy and the rival suitor have to team up to stop the giant beast, an Allosaurus, from destroying the small village and eating their loved ones.

The film is rather dull at points and the Allosaurus was not all that realistic looking compared to dino flicks to that date. The Allosaurus was cartoonish and looked like a dinosaur that you would see in a children’s show. If you replaced the Allosaurus with a wild animal you would have a grade-z western. There were parts of the film I did like. The scene where the Allosaurus attacked Sarita and Pachito and destroyed the barn trying to get them is interesting, but comparable to what you‘d see in the 70‘s children’s TV show, Land of the Lost. It was not a great film, but being a dino-film completist, I had to purchase it nevertheless. It is currently available on Bluray as a double feature with The Neanderthal Man. 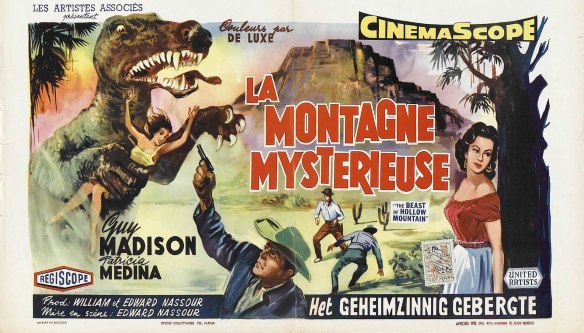 His tongue looks like a rubbery piece of bacon

The Steaks are high!

Is this where the party is at?