I went to a preview screening for Godzilla-2014 on Wednesday night. Before you read my review there’s something that needs to be said. 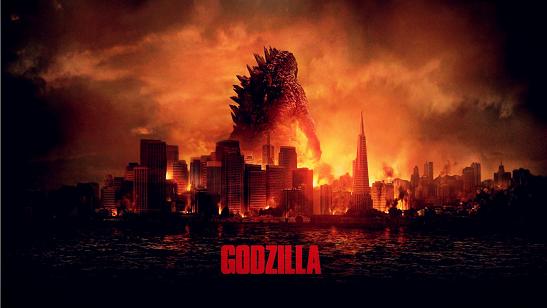 Some of you may have already read reviews from publications such as the Hollywood Reporter, Time Magazine, and big national newspaper publications, complaining about character depth and in-depth story-telling. These reviewers are the type of people that love Academy Award winning films like, Fried Green Tomatoes and Driving Miss Daisy. At best, they have two or three sci-fi and horror movies that they would ever praise and none of them would be monster movies. Giant Monster movies were birthed, for the most part, in the 1950’s and the stories weren’t so complex. If you get too far away from that, you have a drama, not a monster movie.

I’m not going to detail the whole plot but I will say, like most classic monster movies, the big battle is in the later half of the film. Bryan Cranston was by far the best actor in this film and was convincingly real in his performance as Joe Brody. I was drawn into the emotion of his story. Early in the film he has to seal off a sector of the nuclear power plant as a meltdown ensues, with his wife on the wrong side of the door. He is haunted by this task and secretly sneaks back to the condemned and guarded plant for answers. You can imagine what he finds. The film 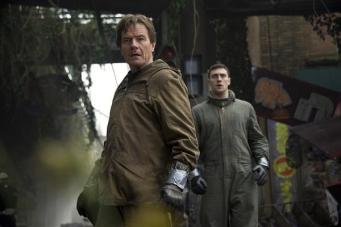 then focuses on his son, Ford Brody, (Aaron Taylor-Johnson) and his family. He has just been granted leave from the military and is trying to get back to his family when all hell breaks loose. Elizabeth Olsen plays Elle Brody, Ford’s wife. Ken Watanabe plays Dr. Ishiro Serizawa, a scientist investigating the seismic disturbances (sort of). His name is a homage to Godzilla creator Ishiro Honda and the character in the original Godzilla, Dr. Daisuke Serizawa.

The monster(s) called MUTO, (massive, unidentified, terrestrial, organisms), are bug-like and alien in design, but much easier to comprehend visually than the Kaiju in Pacific Rim. Scenes with the Muto are reminiscent of Cloverfield but we do get a good look at them soon enough. Naturally, Godzilla rises and battles the Muto in San Francisco, and it’s a Toho-style battle as the creatures smash each other into buildings and crash through infrastructure, causing massive destruction and devastation.

My only complaint is the look of Godzilla. I understand the design makes sense with this storyline. A beast that big lying upon the seafloor would look like a rocky landscape. His stone-like gray/black skin and craggy, slate-looking fins support this in continuity. However, when he finally rises from the sea and we get a good look, he resembles a bear – perhaps a Grizzly or a Brown bear. This correlation also makes sense – two long-term hibernating animals in nature may resemble each other. But I must say, I would have preferred one of the other designs from the early stages of this film’s development. This big guy is almost ‘Poo-bear’ loveable.

Overall I enjoyed the film. The serious tone and personal stories are more gripping than most Kaiju films. Godzilla is huge like the Titans of Greek mythology, supporting his namesake. And there’s massive monster destruction and violence. It’s a respectable entry into the franchise and this Godzilla would eat that 1998 Iguana-zilla for lunch…with room left over for dessert. 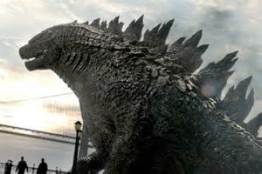 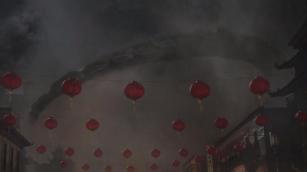