written and directed by Anthony DiBlasi

This starts as a slow burning creeper. It takes a good half hour to catch fire but it does and it is worth the wait. A young rookie cop, Jessica, is assigned to guard an old police station on its final night of operation. The station has a new location on the other side of town. She has to remain at the old one until a hazmat unit picks up some evidence to discard. She is supposed to be alone. Clearly she 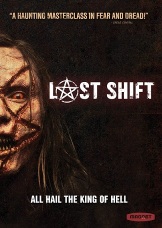 Juliana Harkavy plays a convincing part as the rookie cop struggling to keep her father’s honor and not abandoning her post, while being assaulted by the cult-ish freaks that haunt the halls of the station. The ending leaves a little to be desired but the journey was worth a watch. Currently available on Netflix streaming.

This is a fun horror flick combining both psychological and visceral terror with a super creepy climax.

I give it 3.9 horrifying haunted hails out of 5 on the crazy cult concubine from hell scale.

Directed by Mikael Håfström
Based on 1408 by Stephen King

–
Mike Enslin writes about haunted hotels, motels an B&B’s. He stays in the scariest, most haunted rooms around the world. He writes about his experiences, but he doesn’t believe a word he writes. We get a little time to feel the character in this film, divorced, skeptic, going through the motions. If a motel gets a chapter in one of his books, they see increased bookings. Motel owners and fans send him invites and tips of haunted places in the mail. That’s where he gets a postcard about the Dolphin Hotel in NYC.

The manager of the Dolphin Hotel, Mr. Olin, (played impeccably by Samuel L Jackson) doesn’t want Mike to stay in room 1408. Mike thinks it’s a ploy to build mysticism. There has been a plethora of grisly murders, suicides and untimely deaths in the room. No one can last an hour is what the rumor says.

This isn’t a typical haunting, no spirit or phantom is guiding the action. Mr. Olin says it best, “It’s an evil f*cking room.” So don’t expect a ghostly apparition looking for revenge. The room just loves to torment the guests. It torments the mind. It torments the body, it’s torments from personal memories and personal feelings. Mike is ever the skeptic, ready to debunk every small incident, until he can’t any longer. But 1408 will not let him go even after he admits defeat. It wants to defeat him to the core of his soul.

If you like paranormal and psychological horror, this is one crazy film. You’ll have to keep your wits about you because at one point, the room lets Mike think he’s escaped its clutches when he hasn’t. And nearing the end of the film, when he gets through a lifetime of torment, the clock resets. He’s only been in the room for an hour. John Cusack performs outstandingly as the man being tortured to the brink of madness. I enjoyed his talking into a voice recorder, trying to rationalize what was happening and making little observations about the events. This helps to translate King’s story which relayed much of the thought processes of the Enslin character.

I understand a lot of people don’t like this film much. I liked it quite a lot. It’s one of my favorite Stephen King film adaptations. It’s like a modern equivalent of The Shining, but it’s more than that. You get the feeling of going down that rabbit hole, of falling through the looking glass and that once we’re untethered from reality, everything becomes possible. The haunting is of the mind, not the physical plane. And all is madness.

A frightening psychological paranormal adventure in a small room that finds a man’s greatest fears and thoroughly exploits them.
I give it 4.3 frightening feral accommodations on the malicious machinations of madness scale!

The first victim of room 1408 is a man named Grady, sound familiar? (Grady was the name of the bartender from The Shining)

The axe used by the Fireman to break into the room is the same axe Jack uses in The Shining.

At a book signing the Mike Enslin character says, “Stay Scared.” This is an oft used quote of King’s good friend, Wes Craven. Craven often wrote it with his autographs.

*The post card which has a tip to stay at the Dolphin Motel reads: “Don’t enter 1408” – it consists of 13 digits and letters. 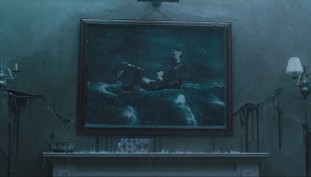