Part of the “Keep Watching the Skies” Blogathon from Cinematic Frontier – Click on logo at right to see more entries of 50’s sci-fi classics!

A US rocket returning from Venus crashes near a fishing village in Italy. Before it sinks beneath the waters depths, a young boy finds a strange figure encased in a gelatinous egg. He trades it to a zoologist and the next day it hatches an amazing little creature. However, this is the 1950’s so rest assured it won’t be ‘little’ for long; it will grow to monstrous proportions. It’s a testament to the amazing work of Ray Harryhausen that the directors of his films are mostly forgotten, but his name and his work lives on. He created a unique creature for this film, part reptilian, part humanoid and part alien, taken from its natural habitat to fend for itself in a strange new world.

Stop-motion animation from Harryhausen (as well as Willis O’Brien) was not Claymation. They did not use clay. They used a metal armature with movable joints, like a skeleton. It was then covered with foam and latex rubber enabling it to hold detail and fixed markings while maintaining flexibility for lifelike movement. For mammals the artists would add hair. You couldn’t get such good detail and movement with clay. Some stop-motion animation involved clay, (Gumby) and others involved wooden puppets (Rankin Bass holiday specials). However, Ymir was made with the aforementioned 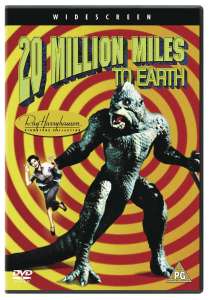 rubber layers and molds over skeletal design. Another big aspect to the magic of stop-motion monster films (one that it shares with Toho’s suitmation effects) is the building of miniature sets. You will see actors running down the street on location, then the monster chasing them on that same street. However, that same street is a miniature version in a studio for which the stop-motion filming can be conducted upon.

Ymir’s humanoid expressions manipulated by the talented and patient hands of Harryhausen, gave the creature empathy. We see shock, disappointment, anger, fear, desperation, all within the reactions of the beast; wide eyes, roars, hand and arm gestures, posture, all used to communicate without words. Because of this, most who see the film feel sad for Ymir’s demise, cringing at the sound of gun shots that bring him down. Ymir’s fight with a zoo elephant brought a special realism to the film and a sense of scale. Ray’s self-drawn storyboards choreographed a tense battle that intercut real elephant footage with his own recreation of the huge mammal.  This was perhaps the greatest creature battle since Kong fought the T. Rex some 25 years previous. Shadows of Ymir will show up in later Harryhausen

creatures, the body is similar to his Cyclops in The 7th Voyage of Sinbad and his face is similar to the Kraken from Clash of the Titans. The wonderful long tail seems like a prerequisite for the snake-like Medusa. As with most 50s sci-fi/horror, there is a sub-plot following a budding romance concerning, Colonel Robert Calder, the only survivor from the space mission, and the zoologist’ s daughter, Marisa, played by the lovely Joan Taylor.

Charles Schneer was a good friend to Harryhausen and an advocate for his fine craft, working with him on nearly a dozen films. This was Ray’s fourth film depicting giant monsters rampaging through cities. The first was his work under his mentor, Willis O’Brien in Mighty Joe Young. Following that was Beast from 20,000 Fathoms, and It Came from Beneath the Sea. Ray and Charles Schneer would move into fantasy adventure films after this, depicting mythological figures in his Sinbad films and other tales of ancient lore.

To younger generations, stop-motion FX doesn’t seem so real. That was part of the charm for our generation. We knew there was an art involved with making these beasts come to life. These FX artists didn’t just copy motions and images from real animals and put it into the creature’s digital repertoire. They infused the model’s movements with their own personality and mannerisms. It’s like the difference between a digital photo of a human face and the Mona Lisa. The Mona Lisa isn’t perfect and that’s what makes her so. That’s what gives her soul and personality. You can sense Ray’s soul and personality through these films, the creator, the adventurer, the craftsman, and the boy with wide eyed wonder at endless possibilities. 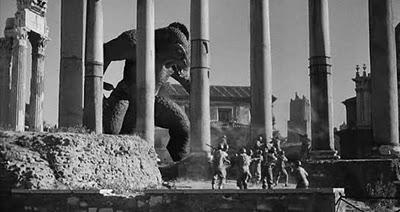 They recently digitally colorized the film and it looks like they did a decent enough job. However, I still prefer to watch it in b&w, the way Ray made it.

Once again, be sure to check out the Keep Watching The Skies Blogathon for more 50’s movie classics! 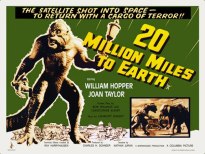 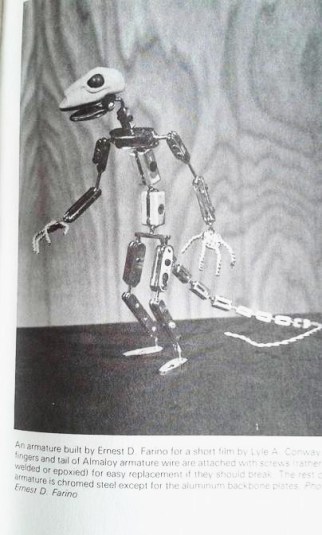 not Ray’s but a good example of an armature 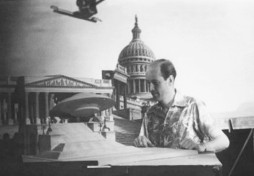 (c) from the Dianne and Ray Harryhausen collection 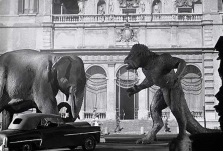 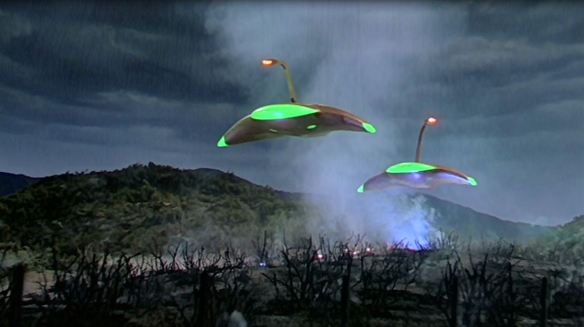 A look back at the golden age of sci-fi, the 1950‘s. Our subject today… Flying Saucers Attack!

In this film, Ray Harryhausen applies his stop motion animation to a non-living thing for the first time, Flying Saucers! The film has an almost documentary feel to the b&w scenes of Giant Saucers attacking Washington DC which adds to the appreciation of Harryhausen’s work. Military stock footage of firing weapons and a battleship encounter was used to maximize authenticity. Aliens shoot down several satellites for which scientist, Russell Marvin (Hugh Marlowe) is investigating with his wife, Carol (Joan Taylor). A saucer lands at a science lab and is immediately fired upon by the military, escalating an inevitable battle. Flying Saucers appear in the skies over London, Paris, Moscow, and DC. In a coordinated attack the begin firing at the cities and people. However, Dr. Marvin has devised a weapon to penetrate their force-fields and fight against the invaders. The amazing scenes of saucers destroying the Capitol building, and crashing into the Washington Monument are classic 50’s Sci-fi images and were most likely frightening to folks at the time it was released. Ray does quite a bit of explaining about how he captured those scenes in the special features on the dvd and blu-ray. On a side note: Joan Taylor also starred in 20 Million Miles to Earth.

Technically, these are not saucers but shaped more like manta-rays. This is often called George Pal’s adaptation of the H.G Wells classic for which he was the producer, but it was directed by Byron Haskin. Bryon Haskin had worked on special effects for The Outer Limits, so he was no slouch. It’s fair to say that it was the combination of both men that brought WOW to life. It was granted a big budget, enabling them to film in color during a time when most Sci-fi films were only b&w. It starred Gene Barry and Ann Robinson as Dr. Forrester and Sylvia van Buren. Everyone knows the story, a meteorite shower drops a bunch of space stones all over the damn planet. In LA, where this film version is set, a guy pokes a meteor with a stick. It hatches a flying saucer thingamajig. The saucers spend some time in the valley gearing up for a war as the earthling scientists study them. Then they attack, destroying everything in their path. This is a wonderful version of the story and a great example of the Golden Age of Sci-Fi. However, with today’s Hi-def, digital dvd/blu-ray, super-clear technology, you can see the wires holding up the alien craft. I never saw any wires when I saw it as a kid – though I probably would have ignored it if I did. But, just to make sure, I asked some older individuals about it and they say, No, the wires were not visible when they saw the film in theaters nor when it was on TV in the early years. So, if you do see the film today with its ‘better than 20/20 vision’ resolution processes, just be aware that you will see the wires.

Trivia notes:
1) Gene Barry and Ann Robinson made a cameo at the end of the Spielberg version (2005) as the grandparents in Massachusetts.
2) In the 1953 version, when the first meteorite/war-crafts fall form the sky an image of Woody Woodpecker can be seen hiding in a tree, center screen. This is an homage to George Pal’s good friend, Walter Lantz, creator of Woody Woodpecker.

This is an Ishiro Honda film that portrays the UFO invasion with the type of destruction that only Toho Studios would be capable. The alien race has an anti-gravity weapon that is demonstrated by a train wreck caused by train tracks lifting off the ground, an ocean liner lifting out of the panama canal, and a flood in Italy. When the Japanese Space Station is destroyed, the ‘world community’ works together to battle the invaders. The battle escalates on the Moon and soon spills onto earth. Saucers come down to destroy buildings and launch meteor torpedoes at New York and San Francisco. The American rockets equipped with Japan’s ‘heat ray’ weapon launch to defend earth. A dogfight ensues in space that is something to see, considering the year it was made. It reminds me of Star Wars as UFOs and rockets battle. Laser beams and death rays crisscross the screen in some high action sequences. Though the film doesn’t share the same intimacy or character involvement that the other films in this post have, it is worth a look-see for fans of 1950’s sci-fi and Toho Films. This film was a loosely based sequel to The Mysterians, although they never mention a previous UFO attack in this film.

Earth vs. The Flying Saucers Gallery: