When does a writer become an author?

One of the advantages to having numerous books on the market with my short stories in them is that people start to call me an author. They start to think of me as an author and they start to treat me like an author, too. I guess I’m becoming an author 🙂

At Jim’s Pyre’s Dead Letter Office, Jim interviews numerous authors at different stages of their career. I’m humbled, being one of the authors that Jim has found to interview. I share the honor and company of outstanding wordsmiths such as, Tim Waggoner, Mercedes Yardley, Alex S Johnson, and Glenn Rolfe.

Thanks so much Jim!

If you would like to hear of my upcoming projects, share in my writing techniques and ideas, stop by and read the interview: The Interview

I’ve been asked to contribute to the ‘My Writing Process blog tour’ by author, Jim Goforth. Jim is deft at visual imagery in his stories that combine both, creepy storytelling and visceral violence. I feel a kinship to Jim because we both spent time in the music scene during the 1990’s, writing about and promoting metal bands, myself in the classic and guitar oriented genre – Jim in the extreme metal genre. Jim’s blog can be found here: http://jimgoforthhorrorauthor.wordpress.com/ (More about Jim in a bio at the end of the post.)

Ok, this is where I answer questions about the My Writing Process. Here goes:

1) What am I working on?
Michael Thomas-Knight: I’m working on a novel about an abandoned carnival in the Arizona desert and it’s attempts at resurrection, much to the dismay of the local townsfolk and the benefit of a young woman on the run from her abusive boyfriend. I had originally wrote it as a screenplay many years ago, but I was quite naive thinking I could get it to someone in filmmaking that would read it. I have no connections. L  I’m also working on horror short stories continuously, the latest based on a real-life incident when I lived with my Mom and family, and some local kids stole the pumpkins from our back porch. In real-life we chased them until they dropped the pumpkins – in

the story, the character never stops chasing them.

2) How does my work differ from others of its genre?
Mike: Because of my upbringing, my stories have a voice that is different than others. I’m not sure if that’s good or bad. I have a cynical outlook in all my stories, but not in an emo, brooding way or in a whiny, complaining way–more like an acceptance of how life unfolds. The story, “The Gates of Lament” from the Cellar Door II Anthology is probably the only story that has a true ‘hero’ in it. However, he’s kinda’ the reason all hell broke loose in the first place so I don’t know what that says about him. Secondly, I’m not a literary kind of writer. My stories will never win awards. I’m like a guy telling you a creepy ghost story on a hot summer night at a backyard barbeque.

3) Why do I write what I do?
Mike: I write these stories to keep my sanity. I never realized what a weird and splintered upbringing I had until I started to put some of these things down on paper. I’m always smiling and always making the best of things, but there’s a dark dismal side to me that grows and festers. It needs to get out or it poisons my soul. When it overwhelms me I can be destructive. With every story I write, I leave a part of that dark poison on the paper. There is some true-life in every story I create, even things I can’t bring myself to talk about, and I think my writing helps to stabilize my personality. 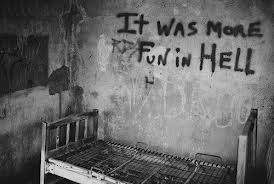 4) How does my writing process work?
Mike: I’m not the type of writer that sits at a desk and says, today I’m going to write a thousand words toward my novel. ‘NANO Wri Mo’ may work great for some people, but mostly during that month of word counting, writers seem to write a bunch of shit, trying to reach that quota – 50 thousand words of garbage that should be tossed in the trash but instead wind up on Amazon.com because they completed something.

I love the quote by Hemmingway:
“I write one page of masterpiece to ninety-one pages of shit. I try to put the shit in the wastebasket.”

I’ve tossed plenty of my stories into the trash. I’m not saying the stories I send to be published are better than anyone elses, but they have a real meaning to me and have reached a standard within myself to let them be seen. Not that it will make them any more popular, I have an eclectic

Most of my stories are a combination of a real-life event, like a news story, and a real life experience. ‘Steel Deliverance,’ my story in Terror Train, came together because of a kid in High School that committed suicide, combined with my experiences in my first apartment. The third-floor apartment was level with the raised platforms of the Long Island Railroad. Every night in the fall, a train would stop about a mile before the station and sit idol for a few minutes. I’d awaken and gaze out the bedroom window at it. The engine and first car were lit, but the rest of the passenger cars were always dark. Creepy.

As for the mechanics of writing, I like to write in a spiral notebook. I write in a non-linear fashion, sometimes adding things in the margins, on opposite pages, and squeezed in between the lines. I’ll add notes about how I want the character to feel and what I want to convey to the reader along the edges so I can select the proper words in my re-write(s). Writing doesn’t come easy, but I keep

hammering away at the story until it resembles what I had in mind. I might do a hundred rewrites and edits on the same story. I’m not great at grammar so I try to get someone else to look at that aspect of my stories. When I’m near completion, I’ll try to get a few people to read it and get their opinions. I’ll make some changes based on their suggestions. If I can, I like to put the story aside for a few months and totally forget about it. When I go back and read it with fresh eyes, I see things that need change much easier.

NOMINATIONS for the NEXT Stop on the Blog Tour:

OK, now it’s my time for me to nominate a few writers for the next stops on the My Writing Process blog tour. They will be posting answers to these very same questions on July 14th, so stop by and read about the writing process of these excellent authors.

Tim Prasil writes speculative prose fiction, audio and stage plays, and humor. His series of interconnected “ghostly mysteries” featuring Vera Van Slyke, an occult detective from the early 1900s, will be released by Emby Press later this year. Prasil’s plans are to begin a series of Vera Van Slyke novels, too. Each Friday, he posts a tipsy quip or a rickety limerick attributed to Finbar Kelly, a project that he hopes to one day collect as a book. Prasil’s Inventor of Persons blog features free downloads of his writing, bibliographies of his research into early occult detective fiction and ghost-related non-fiction, Sherlock Holmes movie reviews, and more. You can find the blog at: http://timprasil.wordpress.com

Rick Pipito – author, on air personality, and musician from Philadelphia, PA. His ever popular FLESH AND LEFTOVERS horror series has placed him in to the top 25 of independent authors on Authors Data Base. He also worked with his brother to form sCrypt Comics, where he strives to help other indy artists and writers by creating graphic novel spinoffs of his main books. In addition to his writing, Rick is also the CEO of Homemade Delish, a place where all foodies can go to follow his wife’s amazing talents. Follow Rick on Twitter and instagram @Rickpipito. Follow Rick’s blog at: www.scryptcomics.com

His works can be purchased in print at: www.lulu.com or for the kindle at www.amazon.com.

Joseph Pinto is the horror author of two published books including the poignant novella Dusk and Summer as well numerous short stories; his most recent works can be found in Midnight Echo Magazine and Sirens Call Publications. He is a member of the Horror Writers Association as well the co-founder of Pen of the Damned, a collective of angst and horror driven writers. Joseph hails from New Jersey where he lives with his wife and young daughter. Indulge in his unique voice on his personal blog, JosephPinto. com and PenofTheDamned.com. You can follow him on Twitter @JosephAPinto. www.Josephpinto.com

Dusk and Summer – http://www.amazon.com/dp/B00JCHFWK0
(Joseph will be donating a portion of proceeds to the Lustgarten Foundation for Pancreatic Cancer Research)

And thanks again to Jim Goforth for asking me to participate:

Jim Goforth – horror author from Holbrook, Australia. Happily married with two kids and a cat, writing tales of horror since the early nineties. After years of detouring into the worldwide extreme metal community – writing reviews for hundreds of bands with Black Belle Music, he has returned to fiction with his first book, ‘Plebs’ published by J. Ellington Ashton Press. He has since appeared in anthologies and a collaborative novel due out next month. A collection of short stories will soon follow.