This is the third anthology by Amicus Films and features both Peter Cushing and Christopher Lee in separate segments. The stories and screenplay were once again written by Robert Bloch. The film was directed by Peter Duffel and features an interesting and unconventional soundtrack by Michael Dress. It opens with scenes of the house itself, a sufficiently creepy but real dwelling. The camera passes through black iron gates to see the brick façade with Ivy crawling up its surface, cathedral windows and jutting turrets. Inside the home is furnished with antiquities from bygone eras and dated design. We cut to Inspector Holloway (John Bennett) from Scotland Yard questioning a local officer, Sergeant Martin about the disappearance a of film star. Paul Henderson was last  seen in the home he had rented in the countryside. Martin pulls out a case file on the house and its strange history. He goes into stories about the inhabitants and how they all came to untimely demise. So we enter each segment:

Method for Murder
A writer, Charles Hillyer (Denholm Elliott), looking to finish his latest murder/horror novel moves into the home with his wife, hoping the isolated country surroundings will give him the peace he needs to create. Once moved in, he immediately conjures his main protagonist, a brute psychotic named Dominic, who likes to strangle his victims with his bare hands. However, soon 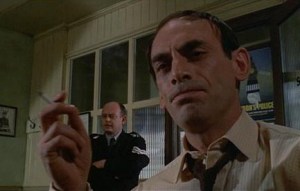 Charles is seeing the strangler in the house; in the dark corners of the hallway and outside in the garden. Will reality prevail of will the writer be strangled to death by his own character?

Waxworks
Next up, Phillip Grayson (Peter Cushing) is a retired theater actor, looking for a quiet place to call home. We soon see that he is distraught over a long lost love named Salome. Wandering aimlessly through the local town he comes across Jacquelin’s Museum of Horror where he finds a beautiful figure that looks exactly like, Salome. The proprietor explains she was cast from real life and relays the story of how she was murdered. Mr. Grayson leaves in a flustered state and is soon having strange dreams surrounding this figure in the museum and her alluring beauty. The dream sequence is a fantastic piece of shock horror visuals. He is awakened by a visiting friend, Neville, who had also courted the beautiful Salome.

While in town, Neville also discovers the wax image in the museum. Quite strangely the competition between the two old friends is reignited. Only one can be with her and the winner gets his wish!

Sweets to the Sweet
In the third story, John Reid, (Christopher Lee) is a single father raising his daughter Jane. Jane is about 6 or 7 years old with long blonde locks and innocent blue eyes. He moves into the country home to be away from the town and populous. He hires a teacher for Jane, unwilling to let her go to public schools. The teacher, a widowed Mrs. Norton, soon learns the strange parameters of the father and daughter relationship. Jane is strangely fearful of fire, is withdrawn and angry. Mr. Reid will not let his daughter play with other children and will not permit toys in the house. Mrs. Norton soon realizes that Mr. Reid is terrified of his daughter. The reasons become clear one night when a black out leads Mr. Reid to discover missing candles and Mrs. Norton discovers that Jane has been reading books on witchcraft.

The Cloak
The final story concerns the missing actor, Paul Henderson (John Pertwee). In town for a low budget film production of Dracula, he searches out his own wardrobe to replace the unauthentic clothes the film production has given him. He finds a cape in a small costume shop. When he puts it on, he is empowered with the powers of a real vampire. This tale has comedic elements as Mr. Henderson is dumbfounded by not seeing his reflection in the mirror and accidentally bites his co-star, Carla, played by the lovely, Ingrid Pitt. There is even a scene that mirrors The Lost Boys as Henderson begins to float at the strike of midnight and is stunned by the incident. Henderson states that he wants to play his role like Bela Lugosi, not that new guy, in an obvious reference

to Hammer films. This is my least favorite of the stories but not bad for campy entertainment.

The film wraps up with Inspector Holloway finally visiting the House and discovering Henderson and Carla in the basement. They are now full-fledged vampires and asleep in their coffins, that is, until they are disturbed by the investigator. This is another good Amicus anthology with well-written stories and convincingly acted parts. It is not scary like more modern films (none of the Amicus films or films from that age are) but the stories are interesting tales of the macabre. 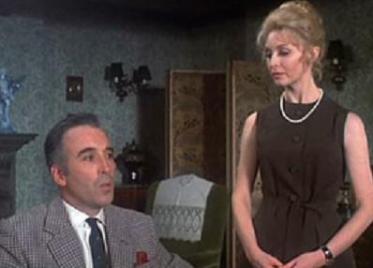 This review is part of a series I am doing to review all the Amicus Anthologies and horror films.