Reviews of horror films that are a good watch for the one time viewing but will probably not be remembered as anything extraordinary.

When stoners meet a pot-growing witch, guess who gets burned? Hansel’s boyfriend sets out to score some weed from the old hag across town. He goes missing. Local dealer, Carlos, is uptight about a dope dealing granny selling on his turf. All the locals are hooked on granny’s Black Forest weed and his sales are suffering. He sends Manny to granny’s with a threat. Manny is never seen again. The more young men granny eats, the younger she gets. She eventually turns into Lara Flynn Boyle. Hansel and Gretel (and Carlos) inevitably pay the witch a visit. Full of bloody 80s style, practical gore effects. Moderately entertaining, campy one-liners and quasi humor. Highlights include two women kissing, eyeball eating, a cleavage shot and a forest of marijuana plants.
.

Asylum Pictures has redeemed themselves in my eyes… to a certain extent. I actually like this better that the bigger budgeted, Abraham Lincoln horror release, mostly because there is no CGI. Lincoln swings his mighty scythe and zombie heads roll, blood spurts and bodies fall. All of this is done with practical special-fx, not glossy digital imaging. What more could we want from a zombie flick? The story is not too deep and the script is just average,(i.e. enough to support the zombie killing). The amount of famous quotes from American History in this film does get annoying. Lincoln teaches a young Teddy Roosevelt how to kill zombies and dishes out quotes that are credited to the future president. Two ladies of ill-repute provide cleavage shots. So, Asylum pictures has reached the level of standard B-movie fare. At least it was watchable and doesn’t anger me with its stupidity.
.

I quite enjoyed this movie, it was fast-paced, action-packed and visually interesting. However, the next day, I couldn’t recall many points of the film and for a brief moment forgot that I had even watched a movie the previous night. A murdering entomologist captures human specimens and reassembles them into insect-like museum pieces. He kidnaps the daughter of a wealthy man with considerable means. The father sends out his henchmen to track down the culprit. The killer’s hide-out and personal museum /zoo combined, is in a derelict motel on the outskirts of town. It is booby-trapped and becomes increasingly dangerous as you circle into the depths of it’s web-like corridors. The film was fun to watch but did not leave a lasting impression. It was mostly action and perhaps could have benefited from more investigation into the killer’s psyche. However, like I said, it is enjoyable to watch. Not every serial killer film has to be a Silence of the Lambs or Se7en.
. 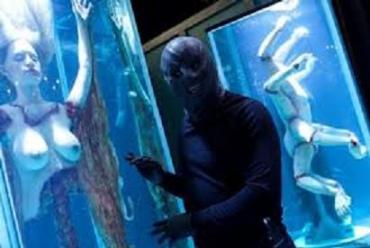 This is an Asian horror anthology featuring three short tales, directed by Patrick Leung, Takahiko Akiyoma, and Tanit Jitnukul. It has no wrap around and just a loose unifying thread (water and infidelity) but, each has distinct qualities that make them unique. Next Door is the story of a love triangle gone horribly wrong. When a young man meets his ex- girlfriend, his more recent lover is jilted. It doesn’t take long to discover that the jilted lover is dead. Queue up the long-haired Asian ghost woman with creepy eyes. Just when you think you’ve seen this all before, the film displays some real originality, especially in the way the jilted lover had died. The 2nd story, Dark Hole, finds a young schoolgirl being bullied, running into an abandoned building. There, she finds a friend in a muddy sinkhole – a creature with tentacles and a voracious appetite. The creature quickly dispatches the big bully that had chased her home from school. Fast forward 20 years and she is a young woman working in an Aquarium. People around her begin to go missing.  Has her childhood protector returned? This was my favorite story of the three, but you must know, I am fond of monster stories. In the final story, Lost Memory, a young mother is in a horrific car accident. However, she can’t remember the incident. She is extremely protective of her young son as news reports of child kidnapping play out on television. When the memories begin to return, she discovers a truth she does not want to face. Black Night is a good set of tales overall and well made, decent viewing, especially for the J-horror fan.
.

Some may ask why REC 3, the 3rd installment of the most original series in  modern zombie films, is in my MotR reviews? The answer is simple. There are some creepy scenes evidencing the ‘demon zombie’ eluded to in the first REC and confirmed in the 2nd film, but REC 3 adds nothing new to its own mythos. In fact, this aspect is barely noticed by anyone aside from the Priest. Second, the film relies on the ‘jump scare’ way too often – the entire film is an hour and a half of jump scares, one after another. Guests show up for Koldo and Clara’s wedding. One uncle has a bandaged hand and relays how he was bit by his own dog. Eventually, and quite predictably, he turns zombie, attacks the reception staff and then makes way for the guests. Chaos ensues. The found footage/camera POV is dropped after a half-hour and the remainder is traditionally filmed. The characters are likable enough and engage in your basic zombie action; crawling thru vent pipes and sewers to avoid zombies and quietly sneaking past standing zombies. There are some fun zombie kills in the usual genre methods, chainsaws, swords, gun shots to the head, etc. I would say it is entertaining and a good watch for the one-time viewing, but not much more. I own REC and REC-2 but have no intention of purchasing this one.
. 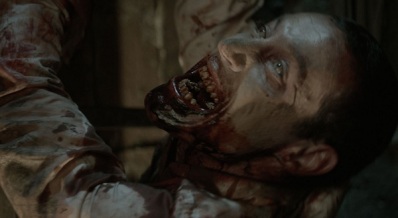 And now for some pics: