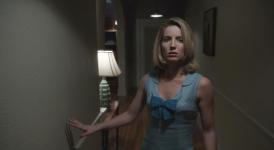 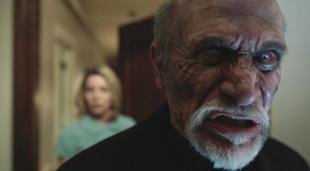 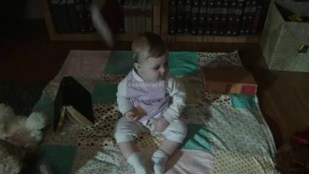 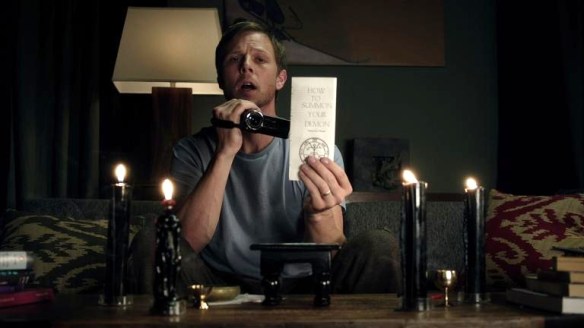 The Possession of Michael King (2014)

This is a film that uses found footage elements along with some traditional film scenes. It tells the story of a young family who suffers a tragedy. The father, Michael King, a devout atheist, sets out to prove there is no afterlife or spiritual world and to document it (or rather the lack of it). He and his camera-man go through some rituals, the blackest of black rituals, to summon bad spirits, angels, demons, anything to disprove Michael’s 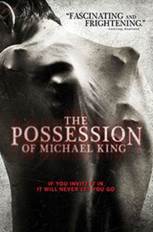 project statement. Nothing seems to garner any results, to Michael’s smug delight, until he visits a demonologist and performs a invocation. That’s when all hell breaks loose.

Though I found the film interesting and appreciate what the filmmakers were trying to do here, the film never fulfills its potential to be scary. It’s a bit creepy at points but it doesn’t build enough tension. The modern style of filmmaking with fast cuts and all action – all the time, never gives the viewer time to let the events emotionally unnerved them. If the film had two or three long scenes that built atmosphere, suspense, and psychological tension, it would have served the story better. This is a case where the found footage style hindered the intentions of the film. This is in sharp contrast to a film like, The Exorcism of Emily Rose, which was a modern possession film, but had a slow atmospheric style that gets under your skin. For another example, what made The Conjuring so effective were the lulls in between the horror-action.

With that said, I still did enjoy the film. It had some unique ideas and visuals for a possession movie. I’d say watch this at your own risk because I can’t wholly recommend it. Some may enjoy certain aspects of the film, but as a whole, it fails to fully deliver the goods. However it was more enjoyable to watch than many of the recent possession films like, The Possession and The Devil Inside.

I give it 2.5 harbingers of hell out of 5 on the nasty demon scale. 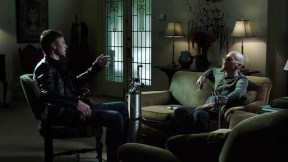 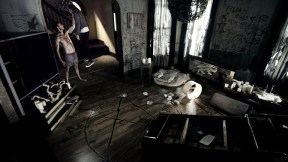 After being thoroughly entertained by ’The Conjuring,’ I was eager to see James Wan’s sequel to his earlier film, Insidious. I like the 1st film despite the similarities to Poltergeist and Nightmare on Elm Street. It had its own originality with the black and red demon. The depictions of the Nether and the veiled old crone were creepy. After a brief back-story scene, Insidious 2 begins immediately following the events of the 1st film. The Lambert family has moved into their mother’s home, having their own home quarantined as a police investigation into the death of psychic medium, Elise Rainer (Lin Shaye).

Josh (Patrick Wilson) is happy that the ordeal is over but his wife, Renai (Rose Byrne), is not convinced. She begins to see and hear strange things in the house, just like at their own home. When she tries to tell her husband, Josh insists that these events are nothing. Eventually the incidents turn into full-on poltergeist encounter. Renai and Lorraine (Josh’s Mom played by Barbara Hershey) get suspicious of her husband’s insistence that it should be ignored.

This first half of the film was successful in creating suspense and delivering a haunting atmosphere. I will say that the phantom piano playing was done better in both, The Others and Grave Dancers but combined with the baby monitor noises, and some ghostly apparitions floating through the rooms, it was escalating nicely. It was good to see Jocelin Donahue from ‘House of the Devil’ playing a young Lorraine in the flashback sequence. I think she’s a fine actress and hope to see her get more parts in film.

(spoiler alert – if you intend to see the film, skip to the last paragraph)
There is a point in this film where everything lined up too perfectly and where everything seemed too explained. The thing that makes paranormal films (and the paranormal in general) scary is the not knowing. I also feel that Wan and Leigh Whanell (co-writer) decided the audience was too dumb to figure things out without slapping them in the face with it. I would say most viewers had already understood that the serial killer, Parker, was abused by his mom and that she made him dress like a girl because she hated men. This was obvious early in the film. But then they had a whole scene, again, which explained it and showed it in better detail. This only made the audience feel sorry for the young boy Parker who grew into the killer Parker.

Feeling empathy toward your main antagonist doesn’t make him scary, it makes him a sorrowful figure. And if that’s not enough, the psychic, Elise, (I know, she’s dead but she was there in the Nether waiting for Josh) then explained it verbally for a third time and added, “If we destroy the memory of the Mom, the spirit looses his power.” Really, that’s too nice and neatly packaged for me. I also love the way the son can fall asleep at a moments notice, even when he is terrified by a psychotic banging down the door. My BS meter was pinned.
(spoiler alert – end)

Eventually, the events became too much to believe. Everything lined up too conveniently. A good film needs to not drift too far from reality to be effective. At times I couldn’t believe all the logic and simple explanations of the events happening. I’d rather have no explanation than a dumb one. I get the same feeling from most cop shows on TV. Every clue leads to another clue or witness and in an hour everything is wrapped up nice and neatly. It’s like paint-by-numbers. It is amazing that a lot of the same techniques that worked so well in The Conjuring, fell flat here. It’s another one of those movies that I wouldn’t mind watching the 1st half, but would then shut it off as it becomes too silly. As always, the sequel isn’t nearly as good as the original.
——-

This is a fun game 🙂

The same armoire as in The Conjuring

obviously horrified by the finale of this film


Related Articles:
The Conjuring
House of the Devil
Creepy Old Ladies in film