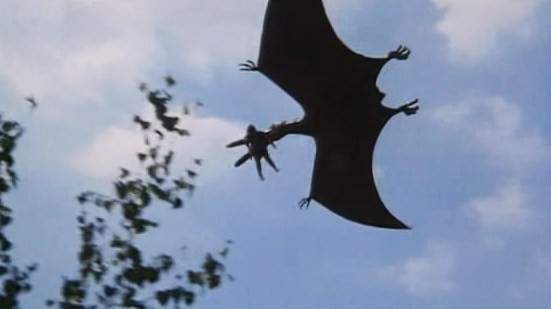 –
Here, I get to continue my task of reviewing Amicus Films, and simultaneously revisiting old and obscure dinosaur movies. From the mind of Edgar Rice Boroughs comes a story set during WWI and encompasses the mystery of the Antarctic, specifically a mythological island, Caprona, and what lies beyond its hostile shoreline. Boroughs pictured an unwelcoming fortress that hides inland secrets, perhaps even the secrets of time itself. I had read some Edgar Rice Burroughs books when I was a young lad but can’t remember a lot of specifics. So I’m not sure if this is a good adaptation, but the high drama and action early in the film certainly reflects good writing.

The story begins with a man throwing a bottle with a message in it into the sea. This bottle travels until it eventually reaches a narrator, who then reads the manuscript and sets the story in motion. It begins with the survivors of a destroyed British merchant ship coming upon the surfacing U-Boat that had sunk them. When the Germans open the hatches, the survivors overtake the commander and take over the vessel. The survivors consist of two Americans, Bowen Tyler (Doug McClure), and Lisa Clayton (Susan Penhaligon), a biologist, along with a handful of British crew from the Merchant Ship.

After some cat & mouse battles for control of the sub, Tyler realizes they are lost in Antarctica, low on fuel and supplies. He convinces the German commander, Captain von Schoenvorts that they should work together in order to survive. They come across a legendary island of Caprona and find an underwater cavern streaming warm, fresh water and plant life. Tyler, with the help of the Captian, navigates the sub through the tight twisted caverns in a visually and dramatically intense scene. Coming out the other side they are in a tropical land with lush vegetation and numerous forms of life.

In this hidden land kept warm by volcanic activity, they discover dinosaurs; a Mosasaurus, a Plesiosaur, a Diplodocus, a

Pterodactyl, two Allosaurus, and two Styracosaurus. There is also a prehistoric amphibian, Ichthyostega. Later in the film a Triceratops and a Ceratosaurus fight a bloody battle. I give the film kudos for using a wide variety of prehistoric animals. They also discover oil and the crew rigs parts from the sub to set up a primitive refinery. They battle cavemen and even befriend one. In the end the German officer, Dietz outsmarts the Brits and leave Tyler and Lisa on the island. However, their getaway is foiled by the erupting volcanic activity and the struggle with the Brits on the vessel.

Special effects in the 1970s were going through a transitional stage. Puppetry and animatronics became more cost effective and feasible than stop-motion and made it possible for actors to interact with monsters in real time. The puppettronics and special effects in The Land that Time Forgot range from decent to very puppet-looking to funky rubber appendages being thrust into the actor’s faces. Most of the dinosaur work was done by FX-man, Roger Dicken animating his rod puppets in scale jungle scenes. Despite the drawbacks, I still enjoy the dinosaur interpretations in the film. In some scenes you can see the carnivorous dinosaurs drool. Animatronics and robotics would take over special FX in the next few years with award winning creature designs such as Alien. However, they could never get Dinosaurs exactly right; not until they were able to combine it with CGI some 25 years later in Jurassic Park. To me it’s interesting to see the early evolution of these mechanical FX techniques.

Roger Dicken also worked on Alien, The Creeping Flesh, The Blood Beast Terror, Thunderbirds Are Go, Warlords of Atlantis and When Dinosaurs Ruled the Earth.

The Land That Time Forgot was remade in 2009 with CGI dinos and with little similarities to the book. Produced by Asylum Pictures. 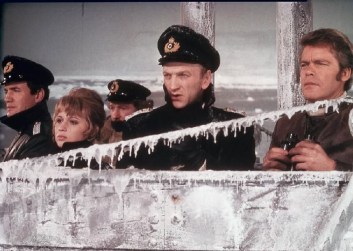 What happened to Jake? He was standing here a second ago… 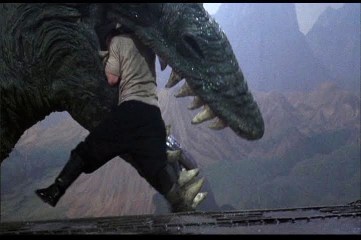 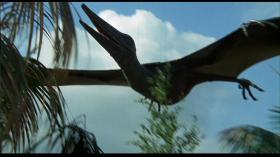 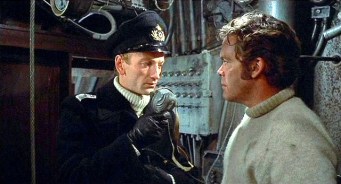 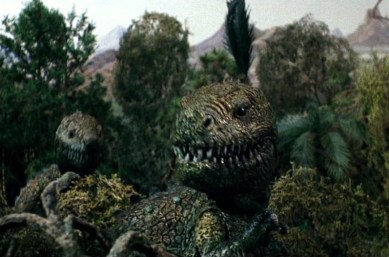 Stand back, I know karate! 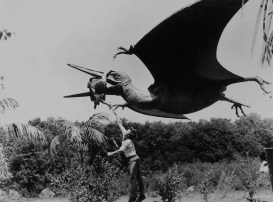 Island goes up in a blaze, but goes out in time for the sequel 🙂