Them! (1954)
The film starts out with a catatonic little girl walking alone through the desert in New Mexico. The State Police pick her up and this leads to a discovery of her parents decimated camper-trailer a few miles away. Further investigation leads to a colony of giant ants. James Whitmore (Bonanza, Gunsmoke) and James Arness (Gunsmoke) play the State police and Edmund Gwenn (yeah, Santa Claus from Miracle on 34th  Street) plays the scientist. He explains the ants gigantism as a fallout from nuclear radiation. The giant ants were filmed nicely for that time – mechanical creatures with giant mandibles that crushed their prey. They also emitted a strange whining noise when they were near which ramped up the tension. The troopers manage to destroy the colony but they discover that two queen ants have escaped and must be re-colonizing somewhere. That somewhere is in the Los Angeles storm-drain canal system, where the Terminators would battle with motorcycle and truck many years later. This is the epitome of 50’s sci-fi films, playing off the concerns and dangers of nuclear testing in the 1950’s mid-west and man’s inability to control what he has accidentally created. The film created a lot of suspense, action, and giant creature terror for its time. One of the best of the era.

The Deadly Mantis (1957)
A volcanic eruption causes the polar ice-packs to shift and releases a giant praying mantis. The ‘prehistoric’ insect has a hunger for humans, killing several men in a military outpost then attacking some unsuspecting Eskimos. From there it takes flight, stops briefly atop the Washington Monument in DC, then finds refuge from the military attacks in the Manhattan Midtown Tunnel. The special-FX in this classic sci-fi giant bug flick are fantastic. The mantis looks mostly realistic (if you don’t look too closely) and the artic scenes are chilling (chilling, get it?). There is some minor destruction at the military outpost and some fine work within the tunnel for the movie’s finale. Despite plot similarities to The Beast from 20,000 Fathoms, this is one of my top picks in the giant bug film category. There is something intriguing about a real praying mantis itself, and the films giant replica is nicely portrayed. Naturally, we have the love-story sub-plot in the face of this catastrophic event, a common staple in many 50’s sci-fi films.

The Black Scorpion (1957)
Believe me, the cover of the dvd, poster, blu-ray and vhs box, does the film no justice. I had been looking for this film by memory, not knowing the name and kept dismissing this dvd because of the cover art. But, low and behold, I discover this is Willis O’Brien’s giant scorpion movie! (w/Peter Peterson). A volcano and resulting earthquake in Mexico releases a nest of giant scorpions who proceed to feed on Mexican farmer’s livestock. When the Mexican army, with the help of an entomologist tries to seal the cavern containing the scorpions, the beasts escape and attack the nearby village and a commuter train. Eventually, the big daddy of scorpions is released from the cave and first attacks and eats the smaller scorpions, then sets its hungry claws on Mexico City. There is no need to tell you that the stop-motion, special effects in this film are outstanding. The train attack sequence is a plethora of destructive action. The big scene at the end that really impressed me was when the Giant Black Scorpion fights the military helicopters in Mexico City. It manages to grab one and throw it to the ground in a heap of twisted metal, then stings it several times to make sure the helicopter is dead – a fantastic sequence. Starring, Mara Corday and Richard Denning.

The special features of the dvd feature an interview w/Ray Harryhausen about his friendship with O’Bie and clips from test footage of never made films, The Las Vegas Monster and The Beetlemen, amongst other fine tidbits. A must have for any 50’s sci-fi fans and O’Brien/Harryhausen fans! 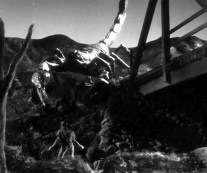