This is the movie where the Tyrannosaurus looks like a Giant Parrot!

This is an Australian release involving a boy who’s plane goes through an electric storm that opens up a portal to a world of lost things. There’s planes, boats, and vehicles of all sizes, killer plants and giant centipedes, and of course, dinosaurs. Once there, he meets a young lady (age 15) from the 1950s and together they survive and even find a way out. To give the film some credit, the dinos are brightly colored and creatively rendered. They use all the latest information from dinosaur discoveries and theories to portray a more modern picture of dinosaur life. The coloration seems to take cues from the Amazon jungles where there are many bright colored animal species.

The film tries to pull a page from the book of Disney and be fun for kids of all ages, but fails to pull it off. The film’s actors are stiff and unsympathetic. I don’t wholly blame the kids here because the script often dumps blocks of information through the 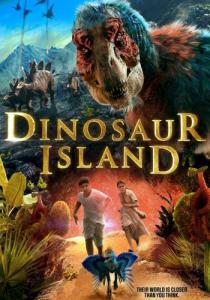 dialogue like text book chapters, just to clarify the story’s progress. The jokes fall flat and the plot is fairly monotone never building to a climax.

I do like the dromaeosaurus and the new-fangled iguanodon. Also the pterosaurs look good and fly gracefully. The raptors look good despite having feathers. The biggest drawback is the T. Rex. Latest fossils have shown skin textures in some of the later Cretaceous Rexes to have chicken-skin bumps mostly associated with feathers. However, they are only in certain areas of the body and thought to be present only on juveniles. In this film we have a full grown T. Rex, fully feathered and brightly colored, looking like some deranged nightmare parrot. I was neither impressed nor menaced by this gaudy creature.

Initially I had been excited about this film and impressed with some of the dinos in the trailer. The CG was very well done and incorporated into the live footage seamlessly. However, the film seems to be pandering to an American audience, mimicking a summer blockbuster and is all the more dull because of it. I would say it is better than most of the shot-on-digital-video, SyFy-style dino flicks. The CG in this is much better than in those flicks. I’m a huge fan of dinosaur movies and try to see them all. Except for a few dino action scenes, DI 2014 is lackluster. I enjoy most dinosaur movies (even the bad ones), but I just can’t recommend this one to anyone but the completist dinosaur movie fan. I think I would have enjoyed it more as a half hour documentary depicting the feathered dinosaur for debate. 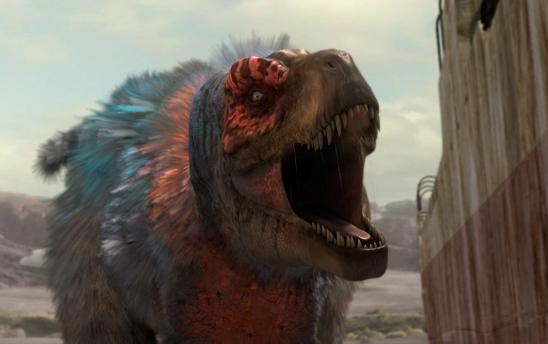 Some cool dinosaur coloration and ideas but overall a lackluster dino film.
I can only give it a 2.0 out of 5 on the feathered dino freak scale.

early Jurassic Dilophosaurus would not have feathers IMO 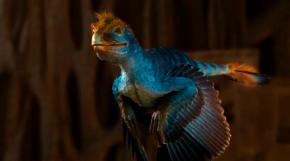 The one creature that could have feathers, doesn’t

which way to the banquet? 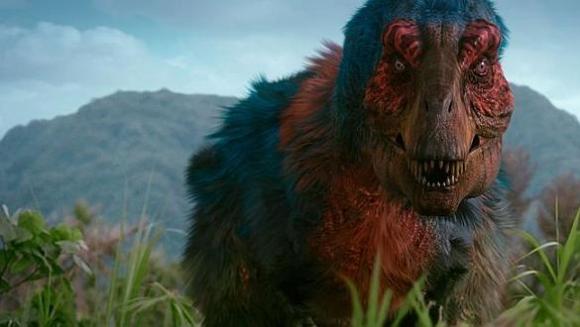 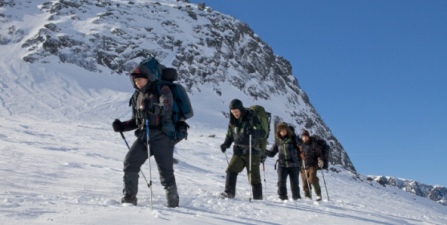 This film just missed being an excellent sci-fi/horror film. A seriously good concept and plot can be found in this film. A documentary film crew sets out to investigate a true life mystery known as The Dyatlov Pass Incident,

where a group of Russian ski-hikers died or went missing in 1959. The great ideas include a back story correlation to a rumored US military experiment gone wrong known as the Philadelphia Experiment. Sounds like a sci-fi fans dream movie. Where this film goes wrong is in its execution. Like turds in a dog park, this film is all over the place. It starts with the usual 1st person found footage format. After a half hour it becomes clear that a story this intricate can not possibly be told in this format. But the film treks on, confusing the viewer and concentrating on typical found footage film fodder — survivors blaming each other, yelling each other’s names in the dark — instead of the more interesting aspects of the original story it desperately wants to tell. When the ‘big reveal’ ending comes, it sputters out like dredge from a gutter rather than a tidal wave of discovery. There is a good story in here for those with patience and deciphering abilities but it is a frustrating endeavor. The presentation takes a competent slipstream /time travel idea and turns it into a mediocre (at best) reality TV show style reject. 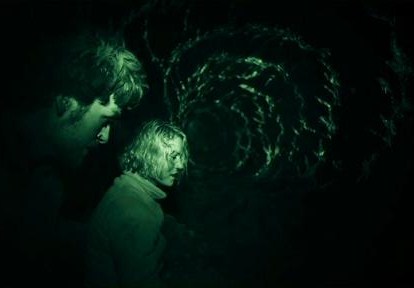 I can only find this film disappointing for its potential unrealized.

I give it 1.5 dismal dunce-caps on the scale of suffering sci-fi dysfunction.