Whenever you get Christopher Lee and Peter Cushing in the same film it is a treat. Add to that, a screenplay based on a story by Robert Bloch and director Freddie Francis, you have the trifecta of old-school British horror goodness.

The film concerns the accursed skull of the Marquis de Sade. Christopher Maitland (Cushing) and Sir Matthew Phillips (Lee), are

collectors of occult artifacts. Maitland is offered the skull by a shady dealer and recognizes it as part of Lee’s collection. Knowing it must have been stolen he turns down the offer to purchase the skull. He contacts his fellow collector about the stolen item and Phillips tells him, he is happy to be rid of the accursed skull. He warns Maitland to stay away from it however, Maitland soon develops an obsession with the skull. When he re-visits the shady dealer, he finds the man dead and steals the skull. Once in his home the artifact haunts and torments Maitland, driving him to insanity and provoking him to kill.

The film is subtle, relying on atmosphere and mood to relay the psychological conflict between Maitland and the skull. The silent battle is brought to the screen superbly by Cushing. The visuals are dated and may be considered hokey by today’s standards, but none-the-less effective as the skull floats through the 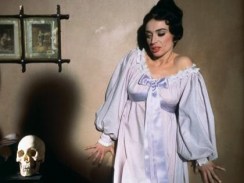 rooms of Maitland’s abode, taunting him to evil deeds. The gothic atmosphere provides a visual appeal that I find interesting. The Skull is quite different than most horror of the time, relying on the psychological horror rather than blood and gore, and the battle of wills rather than the usual perversions associated with the Marquis de Sade. It is a fantastic film for those who like old-style horror.

This review is part of a series I am doing to review all the Amicus horror films.
You can check out all the reviews from links at this page:
Amicus Films – overview 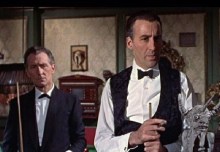